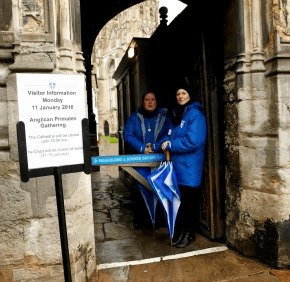 By Simon Caldwell
Catholic News Service
MANCHESTER, England – Because of the U.S. Episcopal Church’s moves to unilaterally change canon law to allow same-sex marriage, Anglican leaders voted to suspend Episcopalians from positions representing the Anglican Communion and from participating in some Anglican bodies.
Primates meeting in Canterbury, England, said that for three years, members of the Episcopal Church will be barred sitting on Anglican bodies making decisions on doctrine and polity and from representing the Communion on ecumenical and interfaith bodies.
The move comes in response to a policy allowing gay marriages, adopted last year by the General Convention, or governing body, of the Episcopal Church, the Anglican Church in the United States.
The change in canon law in the U.S. has been strongly opposed by many of the theologically conservative African churches, some of whose leaders had threatened to walk out of the five-day primate meeting if the Episcopal Church was not penalized for its actions.
The suspension was announced in a statement issued by the primates Jan. 14, a day earlier than planned because of leaks to the media.
It said the changes in teaching on marriage in the Episcopal Church represent a “fundamental departure from the faith and teaching held by the majority of our provinces on the doctrine of marriage,” which it defined as a lifelong union between a man and a woman.
The change had caused “deep pain,” impaired the Anglican Communion by placing “huge strains” on its unity, and created “deeper mistrust between us,” the statement said.
The policy set a precedent that could be copied by other provinces, such as Canada, where Anglicans will vote on same-sex marriage in July, and this “could further exacerbate this situation,” the statement said.
It added that the primates had expressed a “unanimous commitment to walk together” and had asked Archbishop Justin Welby of Canterbury, spiritual leader of the worldwide Anglican Communion, to appoint a “task group” to work toward dialogue, trust and healing among the provinces.
The Jan. 11-15 meeting brought together 39 Anglican primates to reflect on the challenges posed to the unity of their communion.
Episcopal Church Presiding Bishop Michael B. Curry addressed his fellow bishops before they voted for suspension, telling them that Episcopalians were committed to creating “an inclusive church.”
“This decision will bring real pain,” he said in comments he later released to the Episcopal News Service. “For fellow disciples of Jesus in our church who are gay or lesbian, this will bring more pain.
“For many who have felt and been rejected by the church because of who they are, for many who have felt and been rejected by families and communities, our church opening itself in love was a sign of hope,” he continued. “And this will add pain on top of pain.”
The Global Anglican Future Conference, a coalition of conservative Anglican leaders from around the world, welcomed the suspension, adding that “this action must not be seen as an end, but as a beginning.” The suspension infuriated gay rights activists, however, with some traveling to Canterbury Jan. 15 to demonstrate at a “vigil” outside the meeting.
Paulist Father Ron Roberson, associate director of the U.S. Conference of Catholic Bishops’ Secretariat for Ecumenical and Interreligious Affairs, said he doubted the suspension would have an impact on ARCUSA, the 50-year-old dialogue between the Episcopal Church and the USCCB Committee on Ecumenism and Interreligious Affairs.
He told Catholic News Service Jan. 14 that while “the statement of the primates could be open to different interpretations,” in the bilateral dialogue, “the Episcopal Church never claimed to represent the other Anglican provinces.”
Each province of the Anglican Communion is independent and runs its own affairs; even the Archbishop of Canterbury has no authority over an individual province like the Episcopal Church or the Anglican Church of Canada.
Cardinal Kurt Koch, president of the Pontifical Council for Promoting Christian Unity, told Vatican Radio Jan. 15 that he hopes the next three years “will be used to find deeper unity within the Anglican Communion.”
The cardinal noted that the official Anglican-Roman Catholic International Commission, the official body for Catholic-Anglican theological dialogue, is discussing on a general level what the Anglican primates were dealing with at their meeting.
“On the one hand, there is the relationship between the local church and the universal church,” while on the other hand there is a need “to find greater unity” in dealing with ethical questions. “These are the principal themes of our dialogue and have become visible now in the Anglican Communion. It would be beautiful if our dialogue was able to be of help to the Anglican Communion so that it would find its unity again.”
The Episcopal Church, which has about 2 million members, is among the most liberal of Anglican provinces in the world and has continuously divided opinion among Anglicans with its policies.
Tensions came to the fore in 2003 when Canon Gene Robinson, who was openly gay, was elected an Episcopal bishop. Soon afterward, then-Archbishop Rowan Williams of Canterbury asked the Episcopal Church and the Anglican Church of Canada to halt any future such ordinations and to withdraw from the Anglican Consultative Council.
After Mary Douglas Glasspool, a lesbian, was ordained as suffragan bishop of Los Angeles in 2010, Archbishop Williams barred members of the Episcopal Church from representing the Anglican Communion on international ecumenical dialogue commissions.
Contributing to this story were Barb Fraze in Washington and Cindy Wooden at the Vatican.
Copyright ©2016 Catholic News Service/U.S. Conference of Catholic Bishops.
See also:
No one ‘deserves’ faith; it is a gift, pope says
Faithfulness in mercy is God’s way of being, pope says
PrevNext