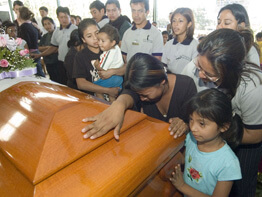 WASHINGTON – Hanley Denning, known in Guatemala as “the angel of the garbage dump” because she helped poor children escape garbage picking as a livelihood, died in a car crash in Guatemala.

Five days after her Jan. 18 death at age 36, a documentary featuring Ms. Denning was nominated for an Oscar.

Ms. Denning died from injuries suffered when the car she was in collided with a bus on a mountain road outside of Guatemala City. She was a native of Yarmouth, Maine.

With help from a $10,000 grant from the Sisters of the Precious Blood in Dayton, Ohio, Ms. Denning founded Safe Passage in 1999, an educational reinforcement program for children whose parents take them daily to Guatemala City’s garbage dump to look for recyclable articles that could be sold.

Ms. Denning, a teacher, had originally gone to Guatemala to learn Spanish so that she could better work with Hispanic students in the U.S.

On Jan. 23, “Recycled Life,” a documentary in which Ms. Denning commented on the lives of garbage pickers was nominated for an Oscar in the category for best documentary short by the Academy of Motion Picture Arts and Sciences.

“She did so much in so little time. She was 100 miles ahead of the next person,” said Mike Glad, writer and producer of “Recycled Life.”

Glad interviewed Ms. Denning several times from 2001 to 2004. He told Catholic News Service in a telephone interview Jan. 24 that he plans to edit the interviews and include them in future DVDs of “Recycled Life.”

Finding Ms. Denning was easy for a filmmaker looking for someone who interacted with garbage pickers, said Mr. Glad.

“It was like two expatriates coming together in a bar in Afghanistan,” he said.

Mr. Glad said that after a nun took Ms. Denning to the dump, Ms. Denning decided that helping the children who pick through the garbage would be her life’s work.

A priest let her use an abandoned church next to the dump, said Mr. Glad. “She swept it clean, chased out the rats and the next day she had 40 kids show up.”

Convincing parents that education is a better path for their children than garbage picking was difficult for Ms. Denning, he said.

Parents were used to taking their children to the dump because the extra hands meant finding more recyclable things to be sold, he said.

Her program involved giving free meals to the children, tutoring them, encouraging them to go to school and providing gift packages of foods and medicines to the parents, he said.

“The gift packs were the reward to parents for giving up their children to education,” said Mr. Glad.

“She was a young, attractive girl. I was amazed how she could be such a entrepreneur,” he said of Ms. Denning’s fundraising and organizational skills.

From the initial start in the abandoned church, Safe Passage has grown to where it now has an annual budget of $1.6 million and a full-time and part-time staff of 100 employees, mostly in Guatemala.

To support Safe Passage, Ms. Denning developed a fundraising organization in the United States and relied on volunteers, many from U.S. Catholic parishes, to work in Guatemala for brief periods of time.

“Through her dedication and those working beside her, 550 children are in school, destined to become productive, working adults with a hopeful future,” said Paul Sutherland, chairman of the Safe Passage board of directors, in a statement on Ms. Denning’s death.

“Hanley’s life was an inspiring example of what one individual can accomplish in the cause of humanity if they dedicate themselves, work hard and stay the course through headwinds and setbacks,” said Sutherland, a portfolio manager in Travis City, Mich.

In a 2004 interview with CNS, Ms. Denning said she listened to people describe their needs and then drew up plans for a program based on her teaching and working experience with the U.S. government’s Head Start program.

“I saw hundreds of kids who really wanted to go to school and, for what I thought was a nominal amount of money, couldn’t. As an educator, it angered me,” she said in 2004.

“The children we serve are very at-risk in the sense that they are growing up in one of the worst areas of Guatemala City,” she said. “The area is plagued by gang activity, drug abuse and crime.

“A lot of the kids never had any formal structure or experience in school, so some of them had behaviors that were difficult for even the most hardened teachers to imagine,” she said.

Writer and producer Mr. Glad said that Ms. Denning once told him of the life-changing impact that her first visit to the garbage dump had.

“She said: ‘You don’t see it coming and all of a sudden you know what you have to do for the rest of your life,’” said Mr. Glad.

After Ms. Denning’s death, her body was taken Jan. 19 to a funeral home in Guatemala City, which mourners visited through the night, and then was taken to the school the next day. Her body was returned to Maine Jan. 22 and funeral services were held Jan. 23.

She is survived by her parents, Michael and Marina Ms. Denning of Yarmouth, and three brothers, Seth of Washington D.C., Jordan of New York City, and Lucas of Yarmouth.