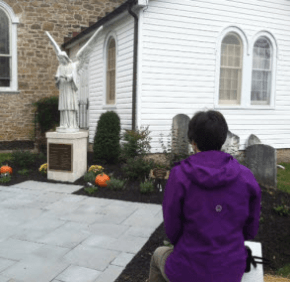 By Jennifer Williams
HICKORY – St. Ignatius, Hickory, parishioner Donna Meros knew as soon as she saw an advertisement in her parish bulletin for help supporting a new Angel of Consolation Memorial Garden that she wanted in.
She and her husband struggled with infertility and lost six children, and she wanted a special way to be able to remember them.
“I was walking out of Mass on my phone emailing Father that I wanted a spot,” she said. “I knew I wanted to do something and I was like ‘Yes, this is exactly what I want to do.’ ”
Meros wasn’t alone.
Monsignor James P. Barker, pastor of the 3,800-family parish in Harford County, said that by 2 p.m. on the Sunday that the call went out in the bulletin, he had the estimated $20,000 in place to construct the garden.
“To have an area in the church cemetery where people can go and pray and remember their loved one and ask that the angels truly lead them into paradise as our funeral rite says, I think is profound and deeply meaningful,” said the priest of 33 years, who has performed hundreds of funerals as part of his vocation.
The idea for the garden came from the parish bereavement group, which meets the first, third and fifth Monday of the month. The garden was formally dedicated Nov. 2, All Souls Day.
Meros, who teaches RCIA at the parish and also owns Essex Florist with her husband, emphasized that a miscarriage is a medical event, but more significantly, it is the loss of a child.
“It’s not something that could have been, it’s something that is,” she said. “Pregnancy loss is a real thing. These children have names and they’re important.”
She has visited the memorial garden, which is tucked away in the historic parish cemetery, which dates back to the mid-1700s. It features several memorialized benches and pavers, with an angel statue mounted on a pedestal serving as a central point. The white marble angel has its palms facing upward and affixed to the statue is a plaque that reads, “May the angels lead you into paradise,” and includes an “In memory of” section listing names and donors.
For James and Karen Sroczynski, the garden is a peaceful spot they can go and reflect and pray for their daughter Sarah Elizabeth, whom the couple lost during their last pregnancy.
The couple’s child is interred in New Jersey, so “it’s nice to have a place down here in Maryland, nice to have a place locally,” said James.
“It’s nice to have a place outside and with her name on it,” added Karen.
They anticipate visiting the garden especially on the anniversary of their daughter’s death, which was July 25, 2008.
Beth Hewett, a volunteer at the parish who has extensive training in working with the bereaved, also knows the pain of loss. Her older brother died in a small plane crash in 2000, and her father died a year after that. Her younger sister died three years ago.
“I started studying and trying to learn to take care of my own grief, and I also had a responsibility to my mother, who was suffering a great deal,” said Hewett, who started the company, Good Words for Bereavement and Mourning, and offers a series of workshops for the bereaved and their facilitators.
She said working with the bereaved is a calling.
“It’s the first time I’ve known a calling in my life,” she said. “I have a great deal of joy in being there with people and also I’m a teacher by nature and training and teaching others to be there for the bereaved is very natural for me.”
Hewett, who has authored several books on bereavement, said “the memorial garden itself should fill the need for people who have no other place to go contemplate their loved ones.”
“When there is no place to go, or no ceremony, we miss something very important. To have a ceremonial and symbolic place to visit can bring solace,” she said.
Pastoral associate Debbie Czawlytko wasn’t surprised at the quick response to Monsignor Barker’s request.
“When a loved one dies, the relationship doesn’t end – that love doesn’t stop,” she said. “The prayer garden is an important way for people to sort of maintain that relationship and think about what their life together meant and the time they did have together.”
Also see:
An evening among the saints
Joint venture in Sparks nourishes thousands
PrevNext