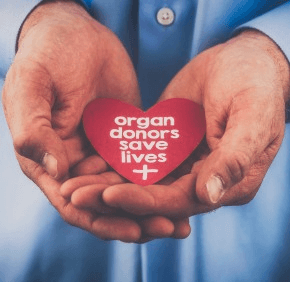 By Maureen Cromer
mcromer@catholicreview.org
April is Organ Donor Awareness month.
Until recently, the only time I had ever thought of organ donation was when it came time to check the little box on my driver’s license application.
Little did I know, a member of my own family would be in need of the life-saving procedure.
My mother is one of eight children, born to Dennis and Josephine Grace of St. Clement I Parish in Lansdowne. If you know anything about the Grace family, you know there are a lot of us and we always have each other’s backs.
Growing up, our grandmother – my “Joma” – always told us we are so blessed to be part of such an amazing family, to be a part of a legacy. In November 2014, that legacy was rocked.
At an annual family meeting, we learned that my mom’s older brother, Michael, was in the beginning stages of kidney failure and in need of a transplant. Everyone in the family began to undergo testing, to determine if they were a match as a possible donor.
There was only one match – my mom’s youngest sister, Colleen. Without hesitation, she agreed to be Michael’s donor.
There was a funny thing about Colleen having been the best match for Michael – they share the same birthday, Jan. 5, 10 years apart. We figured it was God’s little way of saying that this was always how it was supposed to work.
The two went through months and months of testing. Weeks before the surgery was supposed to take place, doctors discovered through testing that antibodies in Michael’s blood were attacking proteins being produced by Colleen’s blood. That meant Michael had a higher chance of rejecting the kidney Colleen would donate to him.
After meeting with their doctors and families, the two entered the Paired Kidney Exchange at the University of Maryland Medical Center. Through this program, Colleen would still donate a kidney, but to a complete stranger with whom she was a more compatible match. Colleen’s donation would ensure that Michael would in turn receive a kidney from a better-matched donor.
Last Dec. 2, in order to save her brother, Colleen selflessly gave a part of herself to save the life of a perfect stranger. The next day, Michael received his kidney.

Colleen Grace-Middleton holds the hand of her brother, Michael, after he had received his kidney transplant. (Photo courtesy of Michael Grace)
Over the next few days, we discovered that Colleen’s kidney went to a California man in end-stage renal failure. She truly saved this man’s life.
I don’t think anything in this world shows more love and selflessness than this gift of life.
Since the surgery, both Colleen and Michael are back to normal and in great health. As my “Joma” would say, we are truly blessed to be part of such an amazing family.
To learn more about organ donation, visit donatelife.net
Maureen Cromer is social media specialist for the Catholic Review and CatholicReview.org
Read more commentary here.
PrevNext