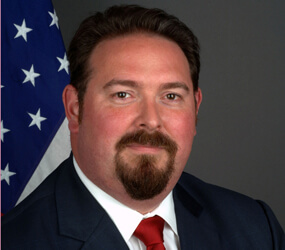 WASHINGTON – A bit of the Second Vatican Council is influencing at least one segment of the Washington government scene these days.

Ambassador Luis CdeBaca, a New Mexico-born Catholic of Mexican descent, who runs the Office to Monitor and Combat Trafficking in Persons at the State Department, readily acknowledges that the council’s call to Catholics to engage the world guided his decision to become a civil rights lawyer and eventually to prosecute some of the country’s largest human trafficking cases.

That call is especially meaningful, he told Catholic News Service, now that he heads the country’s top office that works to disrupt the criminal networks that promote modern-day slavery and human abuse.

“It was very interesting to me,” he said, “especially coming out of law school as a young civil rights lawyer, to really start digging deeper and to realize that Vatican II, if you looked at ‘Gaudium et Spes’ (the council’s Pastoral Constitution on the Church in the Modern World) and … (understand) the real concrete church in the world type of things, wow.”

Since becoming ambassador in May, CdeBaca has met with dozens of officials worldwide in the fight against human trafficking. On Dec. 2 he embarked on his most recent trip, this one to Asia to bring governments together in a widening anti-trafficking campaign.

He said he understands the global network of traffickers who enslave children and adults in the sex trade and in sweatshop labor settings is huge. The State Department estimates as many as 27 million people worldwide are being held against their will.

CdeBaca has been pursuing human traffickers since the days before the were formally called human traffickers. After graduating from the University of Michigan Law School in 1993, he joined the Justice Department as the coordinator of its involuntary servitude and slavery program. In 2000 he became chief counsel of the department’s Human Trafficking Prosecution Unit and helped pass the Victims of Trafficking and Violence Prevention Act, the first law to address trafficking in the U.S.

A year later CdeBaca was the lead prosecutor in the case of Kil Soo Lee, whose trafficking ring involved more than 250 Chinese and Vietnamese workers in forced labor at a garment factory in American Samoa. Lee was found guilty on 14 counts including human rights violations, money laundering and extortion. It remains the largest case of its kind in U.S. history. CdeBaca’s work earned him the Attorney General’s Distinguished Service Award.

In 2007 CdeBaca became counsel to the House Judiciary Committee under Rep. John Conyers, a Michigan Democrat. Trafficking concerns was one of his key responsibilities. His efforts got the attention of President Barack Obama’s White House, which was looking for someone to lead the State Department’s human trafficking office.

CdeBaca was confirmed by the Senate in May and has moved rapidly to build a team approach to the prosecution of trafficking cases not just across the federal bureaucracy, but with local law enforcement authorities as well as advocates of trafficking victims.

His work has earned the praise of victim advocates for his pioneering efforts in taking a victim-centered approach to help victims recover rather than prosecuting them for violating immigration and prostitution laws.

Nyssa Parampil, assistant director of the Anti-Trafficking Services Program with Migration and Refugee Services of the U.S. Conference of Catholic Bishops, called the ambassador a friend of those who work closely with victims. And Renee Huffman, anti-trafficking project manager at Ayuda Inc., a Washington legal and social services organization that works with trafficking victims and immigrants, simply said, “He’s good.”

CdeBaca’s sense of faith-based action has its roots in rural Iowa, not far from Ames, where his family raised cattle. In that part of the state, he recalled, Catholics were few and Mexicans were even fewer. As a teenager, CdeBaca saw how his family lived the Catholic faith: through involvement in the parish, prayer and social justice pursuits in the broader community.

After enrolling at Iowa State University, CdeBaca became involved at St. Thomas Aquinas Parish and joined its active Newman campus ministry program. There, he saw how the parish melded works of justice with liturgy, prayer and Scripture study.

That’s when he began reading the documents of Vatican II, seeing them being lived out at St. Thomas Aquinas. The connection between faith and action was cemented.

Recently he returned to the Iowa State campus to speak in the school’s annual foreign affairs lecture series. While there he saw old friends, particularly those from St. Thomas Aquinas. He said he was glad to hear the parish continues on its path of engaging the world.

Back in Washington, CdeBaca told CNS he wants to make a major impact in the effort to end human trafficking. One of his goals is make sure law enforcement agencies are “facing in the same direction” when it comes to trafficking cases. He said he wants to develop the skills and harness the energies of law enforcement officers to recognize that victims can show up anywhere.

“The ideology we have is the ideology of freedom,” he added. “If people are willing to pull up their sleeves and achieve that measure of liberty, then that’s who we’ll be working with.”