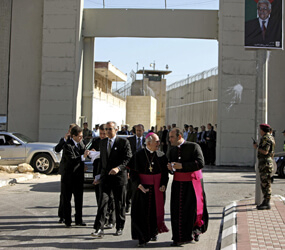 Pope Benedict XVI had to pass through a gate in Israel’s 26-foot-high security wall to get to Bethlehem to celebrate Mass May 13 near the birthplace of Jesus.

And he rode along the wall during his visit to the nearby Aida Refugee Camp the same afternoon.

While Israeli officials, citing security concerns, forced organizers of the event at the camp to move the papal reception away from the wall, the miles of concrete slicing through the countryside and through people’s yards, gardens and fields were impossible to miss.

And for a person born in Germany, a country divided by a wall for decades, it was impossible to ignore.

“Towering over us, as we gather here this afternoon, is a stark reminder of the stalemate that relations between Israelis and Palestinians seem to have reached – the wall,” Pope Benedict told Palestinian officials and refugees.

The meeting took place on the basketball court inside the Aida camp’s school directly across the street from the wall, which Israel insists is necessary to protect its citizens.

The Israeli government says terrorist attacks have declined since the construction of the barrier – a series of cement slabs, barbed wire fences and security roads which, if completed as planned, would stretch nearly 400 miles and restrict the movements of 38 percent of residents of the West Bank.

“In a world where more and more borders are being opened up – to trade, to travel, to movement of peoples, to cultural exchanges – it is tragic to see walls still being erected,” the pope said at the Aida camp, home to nearly 5,000 Palestinian refugees.

“How we long to see the fruits of the much more difficult task of building peace,” Pope Benedict said.

“On both sides of the wall, great courage is needed if fear and mistrust is to be overcome, if the urge to retaliate for loss or injury is to be resisted,” the pope said.

Leaving the West Bank early in the evening, the pope said: “Although walls can easily be built, we all know that they do not last forever. They can be taken down.”

The first step, he said, must be “to remove the walls we build around our hearts, the barriers that we set up against our neighbors.”

Pope Benedict said he wanted his final words to the Palestinian people to be “a renewed plea for openness and generosity of spirit, for an end to intolerance and exclusion.”

It was a message similar to that written on a banner hanging on a building next to the school in the refugee camp; the banner read “We need bridges, not walls.”

The basketball court where the pope spoke was decorated with streamers, paper Palestinian and Vatican flags, and signs with quotes from the speeches that were to be read to Pope Benedict.

“No peace without justice; no justice without return home,” said one, affirming the desire of the original Palestinian refugees and their descendants to return to the land from which they were displaced during the 1948 Arab-Israeli war.

Another said “It is time to end the ‘nakba,’“ the Arabic word for tragedy, which refers to the Israeli occupation of Palestinian lands.

Warm applause greeted the Arabic translation of Pope Benedict’s opening statement that he wanted to express his “solidarity with all the homeless Palestinians who long to be able to return to their birthplace or to live permanently in a homeland of their own.”

Representatives of the camp’s residents told the pope that the Palestinian people have suffered great injustices and crimes, and one of them told the pope that 70 children have been injured in violent clashes because of the wall.

Palestinian President Mahmoud Abbas welcomed the pope to the camp and told him, “You can see the reality on the ground, how the apartheid wall contributes further to the siege and asphyxiation not only of the camp, but also of the Palestinian towns.”

And, Abbas said, more than 80 percent of the 1.5 million Palestinians living in the Gaza Strip are now refugees, “living in a large prison amid the siege, desolation and destruction.”

Pope Benedict told the refugees that peace and reconciliation require courage, a willingness to forgive and generosity.

“History has shown that peace can only come when the parties to a conflict are willing to move beyond their grievances and work together toward common goals, each taking seriously the concerns and fears of the other, striving to build an atmosphere of trust,” the pope said.

“There has to be a willingness to take bold and imaginative initiatives toward reconciliation,” he said.

Pope Benedict asked the young people in the camp to study hard and “renew your efforts to prepare for the time when you will be responsible for the affairs of the Palestinian people.”

As a sign of his commitment to education, the pope gave the camp a check for more than $95,000 to build three new classrooms.

He urged all Palestinians to cultivate the values of peace and nonviolence.

“Peace has to begin in the home, in the family, in the heart,” he said.

Motasen Abu Aker, the 26-year-old son of parents who fled their homes in 1948, works in Aida and other Palestinian camps training children in dance, theater, video and new media.

“People have to receive a message that is different from shooting, killing and bombing,” he said, shortly before some of his pupils were to dance for the pope.

“There is a space for hope in this world. We have to make people think about the future, how to live a good life, and to try to find a solution from the inside, too,” and not wait for politicians to resolve everything, he said.

Pope Benedict had a big smile on his face as Abu Aker’s troupe began its multicultural piece by dancing to Beethoven’s Symphony No. 5.

Contributing to this story was John Thavis in the Aida Refugee Camp.