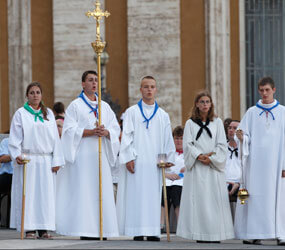 VATICAN CITY – Permitting girls to serve at the altar marked the end of a form of inequality in the church and allowed girls to experience the formative power of directly assisting with the mystery of the Eucharist – the core of the Christian faith, said the Vatican newspaper.

Assisting the priest during Mass is both a service and a privilege and represents “a deep and responsible way to live one’s Christian identity,” said an article published Aug. 7 in L’Osservatore Romano.

“The exclusion of girls from all of this, for the sole reason of their being female, has always weighed heavily and represented a deep inequality within Catholic education,” it said.

Even though there may have been many parishioners who begrudgingly accepted the presence of girls as servers only when there were no boys to fill the role, “overcoming this barrier was very important for young women,” it said.

Permitting girls to assist at the altar “has meant the idea they were impure because of their gender came to an end” and has meant girls, too, “could live out this extraordinarily important formative experience,” it said.

The article came the same week Pope Benedict XVI met with more than 53,000 altar servers from Europe during his Aug. 4 weekly general audience in St. Peter’s Square. The majority of young pilgrims, aged 14-25, were female – 60 percent, according to organizers.

The pope thanked the young people for their important service to the church and said by assisting priests at the altar, they were helping bring Jesus closer to the people and helping to make him ever more present in the world.

In 1994, the Vatican’s Congregation for Divine Worship and the Sacraments issued rules officially stating that local bishops could allow women and girls to be altar servers.

The Vatican clarified in late 2001 that bishops could not require priests to use altar girls and that the use of male servers should be especially encouraged, in part because altar boys are a potential source of priestly vocations.