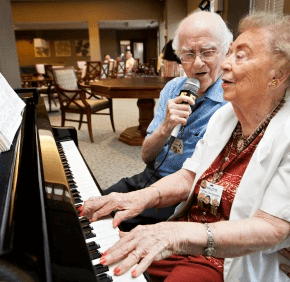 By Maria Wiering
mwiering@CatholicReview.org
A recent study suggests a person’s creativity peaks at the two-thirds point of his or her life, but three Baltimore-area artists – a vocalist, painter and writer – are still sharpening skills in their 80s and 90s. Residents of Baltimore-area retirement communities, the artists take their work into the broader community, but also share it with their neighbors.
Performer
Gene Langbehn, 86
Charlestown Retirement Community, Catonsville
For more than eight decades, Gene Langbehn has lived by the adage “it is better to have tried than just stand aside and never do it at all.” That’s how he started performing as a teenager, testing his voice – which, in his opinion, was pretty good – at New York City theaters’ amateur nights.
It’s also what gave him the moxie to audition, without experience, for a broadcasting role on the Iceland military base where he was stationed at the end of World War II. He was hired.
Langbehn used his G.I. bill for performance training and sang with the USO. With the push of his instructor, he joined a Baltimore-based Gilbert and Sullivan Light Opera Company.
That started his lifelong engagement in musical theater and vocal performance, earning him a 2014 Governor’s Performing Arts Award. Langbehn regularly performs as a soloist or in Charlestown ensembles with an emphasis on music from the Big Band era.
He doesn’t know the origins of his musical talent; he lived in an orphanage from ages 6 to 16 and doesn’t have clear memories of his earliest years. Nonetheless, he’s grateful to his parents, whoever they are, he said.
“They gave me the most precious thing you could ever think of – life,” he said.
When Langbehn sings, he’s often accompanied on piano by his wife, Charlotte Clem-Langbehn, 90. A Protestant, Clem-Langbehn attended Catholic schools in Frederick, where she learned piano from the School Sisters of Notre Dame. She and Langbehn, both widowed, met at their retirement community and married in 2004. The duo performs a “Musical Moments” act at resident dinners.
Langbehn taught 30 years in Baltimore-area public elementary schools, where his ability to entertain was helpful in the classroom. Langbehn and his first wife, Frances, were longtime parishioners of St. Joseph, Sykesville, where he cantored at Mass and was involved in social justice outreach.
Langbehn recently added the harmonica to his repertoire and appreciates its accessibility. “It’s the only instrument you can carry around in your pocket,” he said.
He’s now considering learning to play a guitar that sits in his closet. He also dreams of singing the National Anthem at a Baltimore Orioles games and going on American Idol.
“These are the best years of my life,” he said.

Betty Scott, 91
Roland Park Place, Hampden
“The American couple, on a public barge trip through the canals of Bruges, arrived at an island. No sign identified a reason for the stop,” began a short story by Betty Scott. It narrated the couple’s encounter with the Bruges Beguinage, once home to a community of single women who neither wanted to marry nor enter cloistered religious life, but lived in common and pursued careers.
In descriptive prose, Scott presented the medieval rise of the Beguines as a creative arrangement for civic-minded women, weaving her interests in feminism and travel into a fascinating 800-word essay.
Educated in Baltimore by the School Sisters of Notre Dame both at the Institute of Notre Dame and what is now Notre Dame of Maryland University, Scott joined the U.S. State Department in her early 20s. As members of the Foreign Service, she and her husband, David, spent years living abroad, mostly in Muslim countries.
“The whole idea of writing came when I wrote home and they kept the letters,” she said. She regrets not keeping a journal.
After her husband retired and their family returned to Baltimore, Scott helped to found the Renaissance Institute at Notre Dame of Maryland University, where she “blossomed” as a writer. Her work is regularly published in “Reflections,” the Institute’s literary arts journal, as well as the “Residents’ Review,” a Roland Park Place magazine. The Institute, which offers classes for senior citizens, is celebrating its 25th anniversary this year.
The couple in the Beguinage story is the Scotts; Betty never writes in first person. She embellishes her memories with fiction, creating new characters to help drive a plot or illustrate a point.
Scott was a parishioner of St. Mary of the Assumption, Govans. Her brother was Father Joseph M. Connolly, a progressive Baltimore priest who died in 1993.
A feminist activist, Scott often writes about the importance the Muslim cultures she visited placed on educated women, a value media often overshadow, she said, with stories of oppressive Islamist extremists.

James Drake Iams is an accomplished watercolorist who has exhibited extensively. He spends time daily painting in his home at Mercy Ridge Retirement Community. (Tom McCarthy Jr. | CR Staff)
Painter
James Drake Iams, 86
Mercy Ridge Retirement Community, Timonium
James Drake Iams’ watercolors are on display in galleries in Bel Air, Connecticut and Oregon, as well as at Mercy Ridge, a joint venture of Mercy Health Services and the Archdiocese of Baltimore. An accomplished painter and retired high school art teacher, Iams spends hours each day in his studio creating the landscapes and seascapes for which he is well known.
Iams’ mother joked he was born with a pencil in hand, he said. Believing one should “do what you’re good at,” the native of Pennsylvania attended a teachers’ college for art education before teaching 30 years in Baltimore County public schools. His college instructor was talented in watercolors, and the quick-drying medium fit with Iams’ eagerness to complete works, a process that takes much longer with oils.
“Through quantity you get quality,” he said.
After moving to Maryland, Iams was inspired by the Chesapeake Bay and felt compelled to paint water scenes. His oeuvre is composed of images from the bay as well as the shore; his family spent 26 summers at his parents’ cottage in Rehoboth Beach, Del.
After retirement, Iams and his wife, Barbara, began traveling abroad. Cruise lines hired Iams to teach painting to passengers. Flat file drawers in his studio store scores of his watercolors, including postcard-size paintings that captured their travels. The Iamses look through them more often than their photos.
Iams teaches a weekly watercolor class for seniors at the Community College of Baltimore County. Past and current students have displayed their work in the same shows as Iams.
He said his realistic style of painting is “out of style,” contrasting it to the abstract and conceptual work now popular. Instead of joining the trend, his work has become “tighter, more photographic” as he’s honed his skill.
Iams’ work has won awards, is part of public and private art collections, and been shown across the world. Neither gold nor glory, however, drives his passion.
“I’m flattered if I sell a painting,” he said. “I just love to paint.”
Also see:
Longtime Mercy volunteer concludes more than five decades of service
Key to Key: Gephardt portrays author of Star-Spangled Banner
PrevNext