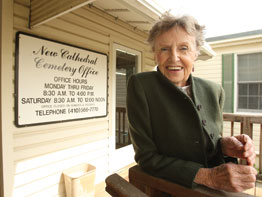 For Anne Lucido, the complexities of life and death are part of the job – literally.

The St. Agnes, Catonsville, parishioner has worked at New Cathedral Cemetery in Baltimore for 37 years.

People in need can find Mrs. Lucido sitting behind an outdated metal desk in a converted farmhouse, which is through the cemetery gates and to the left.

An IMB Correcting Typewriter is nearby, and the 79-year-old still takes notes in shorthand.

“It was not an easy beginning at the cemetery,” recalled Mrs. Lucido, who is preparing to retire in June.

A twinkle in her eyes, she said that the staff at the time consisted of “three grumpy men.”

She said she proved to the men that she was there to stay, lifting books out of the vault, handling office work and counseling the bereaved when necessary.

Mrs. Lucido has had several roles at the cemetery, including secretary and bookkeeper, as well as her current position of business manager. In 37 years on the job, she missed only 13 days of work.

She said she is “thankful to God for good health.”

While some might consider it a challenge to work at a cemetery, Mrs. Lucido considers her work to be “different” rather than difficult.

From her office, Mrs. Lucido looks to the brightly flowered entrance for moments of reflection. She may walk outside and stand on one of the higher points in the cemetery, where in the distance the Key Bridge and the tall buildings in downtown Baltimore are visible.

Mrs. Lucido is well-versed on the rich history of the cemetery.

The population of 125,000 resting amid the rolling hills includes the humble, the notable and the forgotten. Mrs. Lucido knows almost each by name and location. The land off of Old Frederick Road was purchased for Bonnie Brae (beautiful slope) in 1869 and was later named the New Cathedral Cemetery.

Although petite in stature, Mrs. Lucido has an enormous spirit when it comes to compassion. In shopping bags under her desk, she stores the dozens of cards and thank-you notes she has received over the years.

“You have to like people to work at a cemetery,” she said.

Although excited about retirement, Mrs. Lucido whispered, “I want to continue working, but as a volunteer.”

On June 30, she will cover her typewriter for the last time and say goodbye to her office before starting what she hopes is a new career as a volunteer.