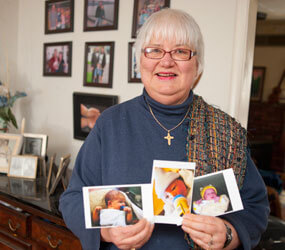 WASHINGTON – Not too long ago, Kay Hughes found a set of suicide letters that she had written to her six children. Then she found a second set.

It has been six years since Hughes experienced the crushing depression that led her to write those letters. Assisted by medications, prayer and her family, she has found a sense of peace and a new ministry of spreading the word about mental illness.

“My inner being was really, really challenged,” she said of the dark years. “I thought I was worthless and a lot of negative stuff. But I needed to counter that with good – with thoughts that God loves me and thoughts of gratitude.”

Hughes, a retired medical technician who lives in the Diocese of Gaylord, Mich., has received encouragement in her work from Bishop Bernard A. Hebda, who invited her to talk to the priests of the diocese about how they could help those with mental illness.

“I reminded them that it was also about how they could help themselves,” she said. “About 25 percent of people have some form of mental illness in any given year, and that means 25 percent of priests, too.”

More than 34,000 people die by suicide in the United States every year, making it the fourth leading cause of death for adults between the ages of 18 and 65, according to the American Foundation for Suicide Prevention. An estimated 1.4 million Americans attempt suicide each year.

Hughes said there is a great deal of stigma surrounding mental illness and the most painful has come from her own Catholic Church. During her “many hospitalizations,” her husband, Jerry, often would inform the parish but would not hear his wife’s name among the sick in the prayers of the faithful.

“I remember him saying with tears in his eyes, ‘I don’t know why they don’t pray for you,’“ she said. She also has heard friends with mental illness say, “I used to go to church, but I don’t anymore. What if someone finds out?”

“How can it be that a church is not a ‘safe’ place – a sanctuary for those who need respect, dignity, affirmation, prayer and hope for recovery?” Hughes wrote in an article for a resource manual put out by the National Catholic Partnership on Disability’s Council on Mental Illness.

Hughes said governments at the federal, state and local level are “ramping down services” for those with mental illness, and “churches will have to step up even more.”

She wants people to understand that mental illness is “a brain illness, like a liver illness or diabetes.” But, she added, “it is an illness that affects the spirit as well as the body.”

Jean Beil, senior vice president for programs and services at Catholic Charities USA, said cases like that of Jared Lee Loughner, charged with killing six people and wounding 13 others outside a Tucson, Ariz., supermarket in January, raised awareness of the need for comprehensive mental health services.

Although the 22-year-old Loughner has not been diagnosed with a specific mental illness – or if he has, the diagnosis has not been made public – the kinds of personality changes he is reported to have exhibited beginning in adolescence can make it difficult for families to distinguish what help a young adult might need.

“The family may have a growing awareness” that something is wrong, but attribute the problems to normal adolescent or young adult anxieties, Beil said. “Sometimes they don’t know how much treatment (the young person) needs, so it gets delayed for them.”

Beil came to the Alexandria, Va., headquarters of Catholic Charities USA from a local agency in the Diocese of Metuchen, N.J. Part of her work there was with the Program of Assertive Community Treatment, a mobile mental health team that helps those with severe and persistent mental illness get the services they need in the least restrictive environment possible.

“It can take many years to figure out what the proper treatment might be,” Beil said.

But many people with mental illness have found the right combination and live peacefully in the community, where others might not know of their struggles, said Deacon Tom Lambert, co-founder of the Archdiocese of Chicago’s Commission on Mental Illness and the father of a grown child with mental illness.

Like Hughes, he stressed the importance of making those with mental illness feel welcomed and appreciated in the parishes.

That can be communicated in simple ways, Deacon Lambert said – by including the needs of those with mental illness in the prayers of the faithful at Masses or by advocating on behalf of greater funding for health care, housing and jobs for them. Mental illness can be the occasional topic of homilies or parish meetings, or short informational items on mental illness can be part of the parish bulletin or newsletter.

But Ann Sherzer, a member of the National Catholic Partnership on Disability’s Council on Mental Illness from the Diocese of Kalamazoo, Mich., believes that people such as Loughner might benefit the most from some individual attention and help.

She recalled the role of Daniel Hernandez, an intern working for Rep. Gabrielle Giffords, D-Ariz., who stepped in to help when Giffords was seriously wounded in the Tucson shootings.

“He was able to assess the needs, remember training from high school and then put it into action,” she wrote recently in the council’s newsletter. “He probably saved Congresswoman Giffords’ life. How different that day would have been if Jared Loughner, the shooter, had met his own Daniel Hernandez when he began to become mentally ill.”