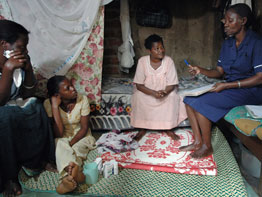 Dr. Gilbert Buckle, executive secretary of the health department at the National Catholic Secretariat of Ghana, said although Africans have seen their peers die from AIDS, many – especially women – still indulge in desperate acts in order to earn a living, hence exposing themselves to infection.

“Sub-Saharan Africa has about 30 million people living with HIV/AIDS; this figure is likely to rise due to cultural, social and economic factors, particularly in West Africa,” he told Catholic News Service.

Sister Matildah Mubanga, a member of the Daughters of the Redeemer and national health coordinator for the Zambian bishops’ conference, said the fight against HIV, the virus that causes AIDS, will remain difficult as long as poverty levels continue to rise.

“Lack of money and poor living standards have greatly contributed to the rise in HIV/AIDS infections in Africa. In Zambia, for instance, where about 70 percent of the people live in poverty, most young women and girls resort to earning a living through prostitution,” she said. “This exposes them to HIV.”

She explained that the continued migration of people from rural to urban areas in search of jobs and a better life and the increase in cross-border trade have created new challenges to the continental fight against HIV.

She and other church workers said in most parts of rural Africa the HIV situation is compounded by inadequate stocks of essential drugs, insufficient medical personnel and the long distances between health facilities.

“In some rural areas, persons infected with AIDS are neglected and abandoned by their families; some die right in their homes because of lack of food and because they cannot manage to walk to health centers, which are usually situated miles away, to access treatment,” Sister Mubanga said.

In South Africa, Dominican Sister Alison Munro, director of the AIDS office of the Southern African Catholic Bishops’ Conference, said the church’s involvement in the fight against AIDS has brought about a tremendous change.

She said church programs have emphasized education, because officials believe that “understanding will lead to change of behavior and attitudes.”

“So far, not much has been achieved in terms of changing of people’s attitudes and sexual behavior because statistics indicate HIV/AIDS is still on the rise,” she added.

Sister Munro said some people still do not believe they can get AIDS through sexual intercourse while others “just don’t care” and tend to pin their hopes on antiretroviral medicine, which suppresses HIV, and condoms.

“Some rural people think AIDS is a white man’s disease and therefore cannot affect them, while others still believe it has to do with witchcraft,” said Sister Munro, who also put part of the blame on what she called bad cultural practices.

Church workers and health care personnel in Africa say sexual practices emphasize the desires of the man over the life of a woman. One priest told CNS that it has been ingrained into African women that “they have no right to refuse their husbands sexually, under any circumstances.”

“The traditional attitudes produce fatal results,” said another priest.
In many African countries, polygamy and large families are the norm, so one infected man might pass on the disease to several wives, who in turn pass on HIV to the children. In many parts of Africa, if a man dies, by tradition his brother is honor-bound to help the widows produce children.

In some countries, partly because of the stigma, people still refuse to discuss AIDS.

Sister Munro said that, since 2000, church-supported HIV programs in Swaziland, South Africa and Botswana have placed more than 600,000 patients on antiretroviral treatment and provided better care and support to people affected by the pandemic.

“I think the Catholic Church way outshines all other faiths and denominations when it comes to investing in responses to the pandemic,” she said.

“The church has been on the forefront of providing quality care and support,” said Sister Munro. “As Christians our concern for people goes beyond basic material needs such as food and shelter to the emotional welfare of people. We often struggle as a church to get money and material resources for our work, especially among the poor. We must never forget, however, that we have a treasury of spiritual riches which doesn’t diminish as it is used: the Bible, prayer and the sacraments, especially the Eucharist and the sacrament of the sick.”

In Kenya, U.S. Maryknoll Father Edward Phillips, coordinator of the church-run Eastern Deanery AIDS Relief Program based in Nairobi, agreed that antiretroviral treatment and education have changed the African situation.

Antiretrovirals “are definitely improving the lives of people,” he said. Such treatment “keeps families intact,” he said.

“The difference between today and the 1990s is that, in the past, people simply died of AIDS without any access to real treatment. People did not know much about AIDS. But today the question is not about death but ongoing life,” he said.

The Eastern Deanery program is one of Kenya’s leading providers of antiretrovirals and tuberculosis treatment, especially to slum dwellers. Father Phillips said that his program is also involved in the development of the country’s AIDS testing and TB services and is spearheading the integration of TB services into HIV care in the country.

Elizabeth Mataka, the U.N. secretary-general’s special envoy for AIDS in Africa, told CNS that, while Africa may have some successes to celebrate, much of the continent is still failing to make progress in the areas of HIV prevention, treatment and care.

“There could be lots of reasons for the situation … but mostly it is because of failure by governments to prioritize their HIV strategies and programs,” she said.

“Botswana, for instance, has managed to reduce the rate at which children born to HIV-infected mothers contract HIV because the country decided to prioritize the prevention of mother-to-child transmission,” she said.

“Regional institutions, like the Southern African Development Community and civil society organizations, require further strengthening” so they can effectively participate in the fight against the pandemic, she said.