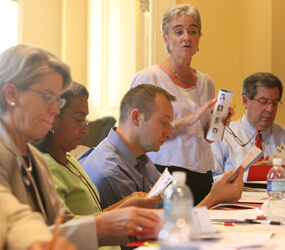 Passing BOAST is a no-brainer.

That’s the response Katharine Knight always hears whenever she explains how the proposed business tax credit would benefit students and teachers in nonpublic and public schools.

Yet the executive director of BOAST Maryland said lawmakers still need convincing. It will take a major push to win passage of the legislation in the coming year, she said.

“Everyone benefits from BOAST,” said Knight, addressing about 75 pastors, principals, teachers, development directors and educators who gathered in Annapolis Oct. 6 for a forum on the legislative initiative.

“We really need your help,” she said. “Our strength is going to be in numbers.”

BOAST Maryland, which stands for “Building Opportunities for All Students and Teachers in Maryland,” is modeled on a similar program in Pennsylvania that has led more than 3,600 businesses to donate more than $360 million to education programs since 2001.

The State Senate passed the measure in the last legislative session, but it was blocked in the House of Delegates Ways and Means Committee by Montgomery County Democratic Del. Sheila Hixson. The chairwoman did not allow it to come for a vote.

Dr. Ronald J. Valenti, superintendent of Catholic schools for the Baltimore archdiocese, encouraged bill supporters to rally their communities throughout the state. He urged them to show “persistence and tenacity.”

“We have to really speak as a united voice,” Dr. Valenti said. “We have to challenge our legislators on why they don’t support this measure. Let them know that we are not going away.”

The superintendent noted that 10 years ago, naysayers doubted nonpublic schools could ever win state funding for textbooks and technology. That became a reality after supporters kept going back to Annapolis year after year, he said.

Mary Ellen Russell, executive director of the Maryland Catholic Conference, said BOAST advocates are not seeking funding for the legislation because of the difficult economy. They just want it put into law so that the measure could receive future funding, she said.

Tax credits are a way to encourage support for critical areas, Russell said.

“The state does it for the biotech industry and they do it for the film industry,” said Russell, who represents the state’s Catholic bishops in Annapolis, “but they don’t do it for groups giving to schools.”