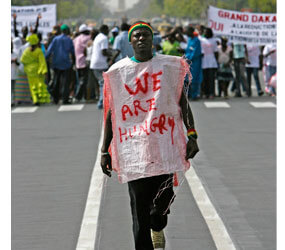 WASHINGTON – Two years ago riots erupted in at least 15 developing countries over the rising cost of basic foods. Frustrated that rapidly rising prices were outstripping their ability to buy much-needed food, angry demonstrators torched vehicles and clashed with police in a series of violent confrontations across Africa, Asia, South America and the Caribbean.

The timing of the price increases coincided with a period of what one hedge-fund manager called excessive speculation – when a limited number of investors dominate a specific commodity market.

Michael Masters, portfolio manager for Masters Capital Management, said excessive speculation can happen where huge sums of money from a relatively small number of sources dominate a specific commodity market. It can happen with food, energy, precious metals or any of numerous other commodities. When that happens, Masters explained, the prices consumers pay can double or triple in a matter of months.

“It causes false signals to go out to producers and consumers of the commodity,” said Masters, who runs his company from St. Croix, U.S. Virgin Islands. “It causes a lot of excess volatility in the market … and makes it much more expensive for the consumer.”

For Masters, a Catholic, such market domination poses ethical concerns that deserve attention.

He said poor people, especially those in developing countries, bear the biggest brunt of excessive speculation.

In the case two years ago, speculators, armed with the massive resources of pension funds and major endowments, cornered large segments of the rice, corn and wheat commodity markets. They also bought crude oil and natural gas futures, rapidly forcing up energy prices.

Then in the second half of 2008, as the world economic crisis gathered steam, the speculators pulled their money out of those commodities. Prices for wheat, rice and corn spiraled downward just as dramatically, driving many American family farmers out of business and hurting small farmers around the world.

Masters believes the only concern of speculators then was maximizing their returns. Those actions cost U.S. consumers $110 billion in higher energy prices alone in 2008 before the bubble burst, according to a February 2009 report Masters co-wrote with Adam White, director of research at White Knight Research and Trading, an independent research consulting firm in Alpharetta, Ga.

Masters questioned the ethics of such financial activity, especially when it involves food.

“If people are living on $3, $4, $5 a day, their choice is to starve. They don’t have any choice,” he said in an interview with Catholic News Service.

“Should asset allocation decisions trump human rights?” he asked. “If a bunch of financial investors drive up the price of food, then people die. If people can’t eat, then there’s something wrong in the free market.”

Such unlimited speculation is a recent phenomenon in the financial industry. A variety of reforms enacted after the Great Depression limited how investments could be made and who could make them. The reforms were designed to prevent wild price swings for both producers and consumers, Masters said.

The limits were in place for 50 years. But in the 1980s the drive for deregulation of financial markets began. Hedgers and speculators wanted the limits lifted on how much they could invest and where to invest it. In 2000, when the Commodities Futures Modernization Act passed, the last major limits disappeared, opening the way for what happened two years ago, Masters said.

And it could happen again, he said.

He’s not alone. Recognizing what they see as a threat to the lives of poor people around the world, more than 450 organizations have banded together in a campaign called Stop Gambling on Hunger. Members range from faith-based advocacy organizations to business and labor.

“We can’t let our world food and energy prices be determined by the whims of investors,” said David Kane, a staff member at the Maryknoll Office of Global Concerns in Washington, one of the leading voices on the issue. “It’s affecting the most vulnerable people around the world.”

Holy Cross Brother Dave Andrews, senior representative at Food and Water Watch, a coalition member, has testified to Congress on the U.S.’ moral and ethical responsibilities to rein in speculators. He said he often cites the statements of Pope Benedict XVI, who has repeatedly spoken on the dangers of globalization as it relates to commodities markets.

But, Brother Andrews said, it’s not enough for advocates to push the issue in Washington. The Stop Gambling on Hunger coalition is working to build awareness of the often hard-to-understand issue of commodities trading in congressional districts so that elected representatives hear about the concerns back home as well.

For his part, Masters would like to see a return to reasonable regulation of the financial industry – and that means enacting reforms that would reinstate limits for all commodities speculators, making market manipulation much less likely.

He said he does not want to eliminate speculators from financial markets. He said risk takers are needed to grow a strong economy. He knows; he’s been a hedge fund manager for 14 years. He said, however, that he has stayed away from trading in commodities that affect people’s livelihood.

One reform measure, the Derivatives Market Manipulation Prevention Act of 2009, has been introduced by Sen. Maria Cantwell, D-Wash. The bill would make it possible for federal regulators to more effectively investigate and crack down on market manipulators.

Masters also has brought his concerns to Congress, testifying several times on the need for reforms. He said some in Congress have listened, but that there’s still a loud voice saying that free markets should rule the day.

“We’re not trying to reinvent the wheel,” he said. “Just put in the limits that worked for 50 years. It’s only when we got rid of the limits that you’ve seen much more volatility than we’ve ever seen in history.”

More information on the commodities issue is online at http://stopgamblingonhunger.org.