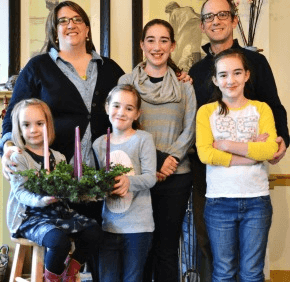 By Maria Wiering
mail@CatholicReview.org
DARLINGTON – For the first time, Dan and Molly Balint have an Advent wreath in their home.
Lifelong Protestants preparing to enter the Catholic Church at Easter, they and their four young daughters are exploring Catholic traditions with the help of an ideal instructor: seminarian Michael Rubeling, whose childhood Advents brimmed with special prayers, foods and celebrations marking the days before Christmas.
Rubeling, 25, sat with the girls in the kitchen of the Balints’ 1812 farmhouse Nov. 21, explaining the Advent wreath and his family’s tradition of putting the crèche’s empty manger in the center. When he and his nine younger siblings made small sacrifices, they would add a yellow strip of paper to the manger. On Christmas morning, a figure of the infant Jesus would be placed atop the “straw.”
Rubeling, whose home parish is St. Peter in Libertytown, grew up with traditions tied to the feasts of St. Nicholas on Dec. 6, Our Lady of Guadalupe on Dec. 12 and St. Lucy on Dec. 13. His family also had a Jesse Tree, its branches adorned with symbols of Jesus’ Biblical lineage.
As her family introduces Catholic traditions into their home, Molly, 38, expects them to enhance the season of expectation of Jesus’ birth and second coming.
For the Balints, this Advent is a period of waiting within a period of waiting.
Dan, 40, decided he wanted to become Catholic a year before Molly did. She knew it was a serious commitment, and struggled with negative stereotypes of lukewarm Catholics lacking a relationship with God. Participating in a Bible study last year with vibrant, knowledgeable Catholic women changed her heart. Because of them, she said, she could envision herself in the Catholic Church.
In September, the family joined the Rite of Christian Initiation of Adults, or RCIA.
Related article: Straw for the manger
Dan grew up in Pittsburgh, Pa., and Molly in Hagerstown. They met at Wheaton College in Illinois. They married and lived in Illinois and Wisconsin before moving to Harford County eight years ago to live near Molly’s grandparents, who have since died, and her father.
After “church hopping” between Protestant churches, the Balints began attending St. Ignatius in Hickory a few years ago with Molly’s grandmother, a devout Catholic. For Dan, who holds degrees in theology, their experience only confirmed what he had long observed: “The Catholic Church just does the holidays right. … There’s a sense of something different about this time of year (in the Catholic Church).”
He was attracted to the church’s “physicality,” such as kneeling and making the Sign of the Cross. Intellectually, he wrestled with the question of authority, and who had “the final say” on differences between Christian denominations.
Dan took a class on the Catholic Church at St. Ignatius and delved into Catholic theology, history and literature, evident from the way he naturally peppers conversation with quotes from Catholic writers Evelyn Waugh, Walker Percy and G.K. Chesterton.
He appreciates dissecting Catholic thought with Rubeling, who visits the Balint home every other Friday evening to catechize the girls: Emma, 12; Mary, 10; Elizabeth, 7; and Catherine, 4, whom they call “Birdy.”
Rubeling, who is spending a pastoral year at St. Ignatius before his diaconate ordination in May, stays for dinner and conversation with Dan and Molly, who ask questions arising from RCIA.
The Balints have observed Advent before this year, but not fully, Molly said. She and Dan joked about quickly squeezing the Nativity narrative into Christmas Eve festivities to make sure their kids could refocus on the holiday. This year, they want to be mindful about their preparation.
“Having a (liturgical) season is awesome,” Dan said. “It’s a challenge, because now you have to be intentional about it. You have to slow down enough to do these things.”
For the Balints, a longer season of preparation will continue until the Easter Vigil. Dan thinks of it like engagement before marriage, and Molly describes it with a sense of homecoming.
“It feels so good to finally know where we are and where our family is headed,” Molly said. “It feels fresh. I know the (RCIA) preparation is important, but I wish we could have been doing this years ago.”
Also see:
Advent ritual: Week three
Making hay while the Advent wreath shines #CRBlog
PrevNext