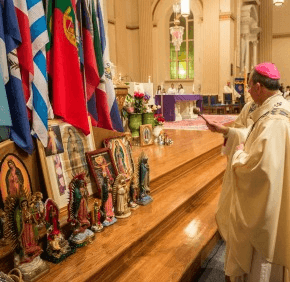 By Jessica Marsala
Special to the Catholic Review
FREDERICK – Even though the Blessed Virgin Mary appeared to St. Juan Diego more than 480 years ago, St. John the Evangelist, Frederick, parishioner Jairo Camargo says that he and his wife, Luz, still feel her maternal love.
In fact, Camargo, who has been married Luz for 31 years, credits the Virgin Mary with helping them through the early marital difficulties they experienced.
“The Virgin Mary has been an important part to our lives for many, many years,” Camargo said, “because in times of hardship we have felt her maternal care.”
Camargo was one of more than about 550 who attended the Frederick parish’s 22nd annual Mass for the feast of Our Lady Guadalupe Dec 12.
View video from the day.
He played the guitar and sang in the Spanish choir during the Mass, which celebrated the Virgin’s apparition to St. Juan Diego in Mexico and the mass conversion of the Native Americans that followed the encounter.
Archbishop William E. Lori, celebrating his first Hispanic Mass at St. John the Evangelist, drew on the insights of Pope Francis’ “Evangelii Gaudium” (Joy of the Gospel) when he noted in his homily that not only were Diego and Mary missionaries, but, as per the apostolic exhortation, “Every Christian is a missionary to the extent that he or she has encountered the love of God in Jesus Christ.”
Related article: Pope praises Our Lady of Guadalupe as great missionary of ‘our America’
In a similar way, the Camargos, who have been parishioners of St. John the Evangelist since 2006, said that they began volunteering in the Pre-Cana marriage preparation program in the early 1990s to “share the blessing” their marriage received after attending a spiritual retreat back in Colombia, where they lived until the early 2000s.
Father Hector Mateus-Ariza, who concelebrated the Mass with Father Kevin Farmer, pastor, and Father Stephen Gosnell, a fellow associate pastor, said he was “greatly impressed” by how the archbishop conducted the entire Mass in Spanish.
Father Mateus-Ariza said that regular Sunday Masses in Spanish began at the Frederick parish 25 years ago.
Maria Teresa De Horacio, 77, a native of Nicaragua who primarily worships at St. Joseph on Carrollton Manor in Buckeystown but helped start Spanish Mass at St. John the Evangelist, told the Catholic Review that the Frederick parish’s Hispanic community is distinctive because of its diversity.
“We come from (about) 20 or 21 countries in Latin America,” De Horacio said.
Those countries were represented in an opening procession, where the Knights of Columbus led flag-bearers and children dressed in traditional costumes, the boys inspired by St. Juan Diego.

Young Hispanic members of St. John the Evangelist Church, in costume dress, dance in celebration of the feast of Our Lady of Guadalupe. (Bob Lenz | Special to the Review)
Archbishop Lori acknowledged in his homily the great diversity of peoples who were inspired by Juan Diego’s encounter with Mary.
“People from different regions, near and far, visited the sanctuary in Guadalupe, also looking for an encounter,” the archbishop said.
Father Mateus-Ariza said that he believes that the most important part of the feast is “Having so many people together, being able to have the Blessed Mother keep bringing people together.”
He acknowledged the challenges that the Kris Kringle parade in downtown Frederick presented to visitors on the second Friday in December.
“We have plenty of public parking buildings here everywhere, but today was impossible,” he said. “Still, people got here no matter what.”
Also see:
Basilica gift shop offers Maryland gifts, including deacon’s spice rub
PrevNext