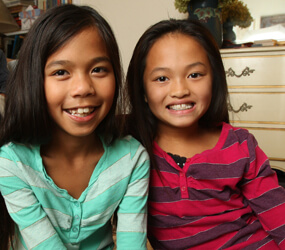 CATONSVILLE – When Judy Wall was hoping to adopt a child overseas with her husband, Michael, she often dreamed about a little girl wearing yellow and white. Soon after the parishioners of St. Mark in Catonsville received word that a baby had been located in Vietnam, the adoption agency showed them the child’s photograph. Sure enough, she was dressed in yellow and white.

“If I didn’t believe in God before, that would have convinced me,” Wall remembered with a laugh.

The proud mother firmly believes it was divine providence that brought her family together. After adopting Ariana from Vietnam on Dec. 1, 1999, the Walls adopted their daughter, Julia, from southeastern China in July of 2000.

Meeting the girls for the first time was exhilarating, Wall said.

“It was like instant recognition that they were my children,” she remembered.

Now 10-year-old fourth graders at St. Mark School in Catonsville, the Wall sisters are committed to helping other children.

As part of National Adoption Month, the girls organized a Nov. 21 fashion show and silent auction at Catonsville Presbyterian Church. They and other area children collected more than 50 auction items. As part of “Project Funway,” they also modeled and sold 70 scarves, sweaters, hats, socks and other clothes that were crafted by a family friend in Miami and her knitting circle.

The children raised more than $1,900, which will be donated to orphanages and causes benefitting children awaiting adoption in Vietnam and China.

“There are still a lot of other people out there with no families,” said Ariana, wearing the maroon plaid school uniform of St. Mark a few days before the auction. “We’re trying to help them. We would like to make them feel cared for.”

Sitting on her mother’s lap in their family’s Catonsville home as her mother wrapped her arms around her, Julia said she and her sister are grateful to be part of a loving family.

“We want to give back to our countries,” said Julia, keeping her eyes focused on “Barney,” the family’s pet terrier, as he munched on a chew toy. “It feels good doing it.”

The girls are looking forward to visiting their home countries for the first time since their adoptions when the family travels to Vietnam and China in 2011.

Reaching out is nothing new for the Wall sisters. They started a philanthropic organization called KidStuff that has organized a letter-writing campaign to raise money to support a critically ill child. The group also helped make quilts for premature babies in the hospital.

The girls raised money for their fashion event by selling bracelets engraved with their organization’s motto: “Make a little difference.”

Wall encouraged families to be open to adoption. As much as it benefits children, she said, it is “even better for the parents.” In thanksgiving for her adopted children, Wall planted two gardens that she has tended for years.

“They’re a blessing from God,” she said of her children.