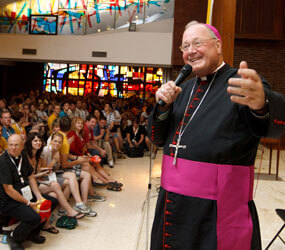 MADRID – World Youth Day pilgrims got down to business in Madrid Aug. 17 as the first catechesis classes taught by archbishops and bishops were held in locations throughout the city.

Sessions were divided by languages, and pilgrims were encouraged to go to the session closest to their accommodations.

At San Ricardo Church, northwest of the city center, cheers and cries of welcome greeted New York Archbishop Timothy M. Dolan as a group of approximately 350 young people – mainly from Australia, the United States and Barbados – caught a first glimpse of their teacher for the day. A clear lover of people, Archbishop Dolan posed for every photo-op, embraced many familiar – and unfamiliar – people, and ended up at the front of the church with an Australian baby propped in his arms.

With his catechesis theme gleaned from that of World Youth Day, Archbishop Dolan spoke about faith as a logical gift from God and about what it means to keep that faith firm.

The best way to maintain a strong faith, he said, is to acknowledge that it is weak.

Using personal anecdotes of his life in New York, Archbishop Dolan explained to the young people that faith is easy to observe, but difficult to define. He called it a gift given by God to those who ask for it: Free will enables people to live without faith, but it’s always ready and waiting.

Archbishop Dolan described what he called the paradox of faith: how in the world today faith is often seen as illogical, unable to be scientifically verified, a crutch for people to avoid the duties and trials of earthly life, and the cause of hatred in the world.

But faith is “the most logical thing of all when you think about it,” he said. Most of the things that matter most to people cannot be demonstrated, such as love, loyalty, friendship, joy and trust.

“We can’t show that under a microscope, and yet those are the most real things in life,” he said.

Faith should be fostered through the sacraments, and struggles and tough times in life should be used to strengthen faith, not hurt it, he said. And, he stressed, Catholics need to remember that faith is not a doctrine, creed or even a church.

“Our faith is in a person, Our Lord and Savior Jesus Christ,” he said. “He and he alone is the root, the origin and the goal of our faith.”

During a question-and-answer session, one Australian pilgrim touched on what will likely be a challenge for many young people once they leave World Youth Day: how to interact with those who do not agree with the basic principles of the Catholic faith and who are, in fact, living a life averse to the church’s teachings.

The archbishop’s answer was simply this: with love.

It was this frank manner of speaking that led Nicole Bedosky, 16, of Middletown, N.Y., to call her archbishop “engaging.”

“Everybody was paying attention,” she said. And seeing her own archbishop was a pleasant surprise and a taste of home, she added.

The catechetical sessions will continue Aug. 18 and 19, offering pilgrims additional opportunities to meet with those in positions of authority in the church – a fact that is much appreciated by the young people.

“They’re taking time out of their lives and their positions to come and speak to young people,” said Rebecca Devitt, 25, of Dubbo, Australia. “It may allow (the youths) to get to know the people who are probably a little bit on a pedestal in a lot of places. It may humanize them a little bit more.”

On the way into the church, Archbishop Dolan told Catholic News Service that World Youth Day is “a powerful icon of the church universal.”

“This is a great honor for me just to be able to teach, because bishops are, first and foremost, teachers,” he said. “To teach 300 or 400 kids who are eager to hear, it’s a challenge and inspiration.”