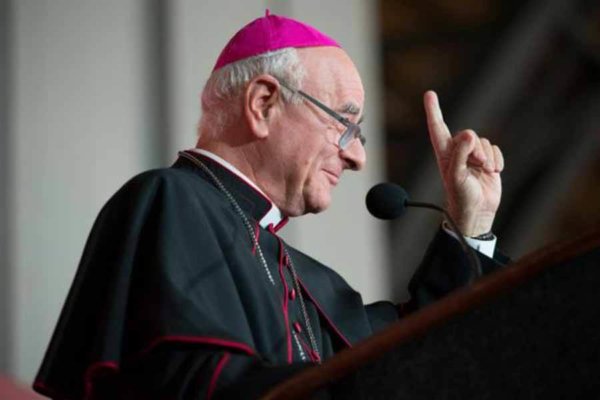 Archbishop Vincenzo Paglia, president of the Pontifical Council for the Family, is seen in Philadelphia Sept. 22, 2015. (CNS photo/Jeffrey Bruno)

VATICAN CITY — The Pontifical Academy for Life is and always will be against abortion and is committed to involving increasing numbers of people in the defense of human life, said Archbishop Vincenzo Paglia, academy president.

In an interview posted June 17 on the Vatican Insider website, Archbishop Paglia defended the nomination of Nigel Biggar, an Anglican professor of moral theology, as a member of the academy.

Tweeting about the interview, which was in Italian, Archbishop Paglia wrote, “Translation: ‘Our NO to abortion is a total NO!'”

Several newspapers and pro-life organizations, including the American Life League, questioned the appointment of Biggar, citing a 2011 interview and debate he was part of with a philosopher who is strongly pro-abortion.

The interview-debate between Biggar and Peter Singer was printed in the online edition of the British Standpoint magazine. Critics focused on Biggar’s statement in the piece that he “would be inclined to draw the line for abortion at 18 weeks after conception, which is roughly about the earliest time when there is some evidence of brain activity, and therefore of consciousness.”

The larger point of his argument, though, was to argue against Singer’s greater openness to abortion and even infanticide in circumstances where a baby is severely ill or disabled.

“Peter’s view is that human life is only valuable if it exhibits certain qualities, and an infant before birth doesn’t have these qualities, so we can abort it — and an infant after birth doesn’t have these qualities either, so we may kill it,” Biggar said. “My view is that we should draw the line much more conservatively. This is simply because the killing of any human being is a morally hazardous business, even if it is permitted at an early fetal stage. It isn’t something that we should do casually and wantonly, and I suspect that Peter would agree with that.”

Biggar said his position that abortion should not be permitted after 18 weeks of pregnancy was to support “maintaining a strong social commitment to preserving human life in hindered forms, and in terms of not becoming too casual about killing human life.”

In the interview with Vatican Insider, Archbishop Paglia said he had not known previously about the interview, but he later spoke to Biggar about it. The focus of the Anglican theologian’s work is on opposing euthanasia, the archbishop said, and he has never written or published anything about abortion “and he does not intend to enter into debates on this theme in the future.”

The idea of abortion possibly being acceptable up to 18 weeks of gestation “certainly is not my personal position and even less the position of the academy,” Archbishop Paglia said.

“We are at the service and defense of life from the first moment of conception to the last breath,” he said. “Nothing and no one will ever change this orientation. If anything, we will go anywhere to convince as many people as possible.”

The mix of people among the new members, he said, was designed to bring together expertise in a variety of life-related fields, and the working of the academy should demonstrate the church’s desire to face issues together “patiently gaining the maximum consensus possible.”

In an effort to broaden the membership of the academy, he said, Anglican Archbishop Justin Welby of Canterbury was asked to suggest an Anglican theologian for membership, and Biggar was the person he proposed.

Biggar is the author of the 2004 book “Aiming to kill: The Ethics of Suicide and Euthanasia,” which reviewed arguments for and against suicide and euthanasia and explored the theological basis for asserting the sacredness of human life.

In a 2009 article printed in the journal Ethics in Brief, Biggar argued for a reform of the health care system to ensure better palliative care for patients in pain. The legalization of physician-assisted suicide, he said, would “jeopardize society’s commitment to the high value of individual human lives, and its support for those lives when they are ailing. It will make society more liberal at the expense of making it less humane.”