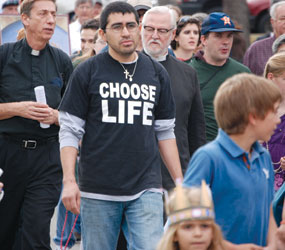 WASHINGTON – If Roe v. Wade – the 1973 Supreme Court decision that made abortion legal nationwide at virtually any point in a woman’s pregnancy – were overturned, the matter would most likely be sent back to the 50 states and require campaigns to restrict or outlaw abortion to be waged on a state-by-state basis.

There’s another life issue that’s been the subject of state-by-state campaigns for 30-plus years: abolition of the death penalty.

After the Supreme Court in 1976 allowed states to reinstate the death penalty, 37 states had laws on the books permitting the use of capital punishment, and nearly all of those states have executed a prisoner. Through March 5, 1,163 prisoners have been put to death, and another 3,308 are on death row.

In Texas – whose 433 executions since 1977 are quadruple the number in the state with the next highest tally – the Texas Catholic Conference joined the two life issues one day in November.

The day started with a Mass at a chapel in Huntsville, Texas, celebrated by Cardinal Daniel N. DiNardo of Galveston-Houston, which attracted an overflow crowd.

The church teaches that “every life has value and dignity. That is a given,” said Andy Rivas, executive director of the Texas Catholic Conference during a Feb. 24 program at the Catholic Social Ministry Gathering in Washington. Mr. Rivas helped devise the Huntsville program.

But in trying to curb the use of the death penalty in the Lone Star State, Texas’ Catholics have had to “pick and choose” the individual cases they think would merit the attention of the governor. Cardinal DiNardo in such cases writes a letter of support for sparing the prisoner, as does the bishop of the diocese where the crime occurred.

“It’s always helpful to have an archbishop or a cardinal write,” Mr. Rivas said.

But a recent state effort to expand the application of the death penalty, despite Texas Catholic Conference lobbying efforts against it, passed overwhelmingly. “There are 33 Catholics in the Legislature. We had only two vote our way,” said Mr. Rivas.

Tom McCluskey, vice president of FRC Action, the legislative arm of the Washington-based Family Research Council, said the effort to ratify amendments to the Constitution may provide a better analogy for state-by-state campaigns to restrict abortion than efforts to abolish the death penalty.

But Mr. McCluskey admitted even that analogy isn’t perfect, since the language of any constitutional amendment would remain the same when considered by each state, while legislation on abortion would likely vary in each state – as would the degree to which abortion could be successfully restricted.

“The lower-hanging fruit is trying to pass more pro-life legislation in the states,” Mr. McCluskey said. He added that, in the 36 years since Roe v. Wade became law, pro-life networks are “already working in the states” to restrict abortion.

“Each state is different,” agreed Mary Spaulding Balch, director of the department of state legislation for the National Right to Life Committee. “Some states have laws on the books that would already say that abortion is illegal, and those are on the books still. There are other states that would have to enact that kind of law.”

What would happen in a Roe v. Wade reversal is far from certain, Ms. Balch added. “There’s a lot of scholarly writing in the event of what would happen,” she said, like how to enforce a law outlawing abortion that is still on the books but that has been dormant for close to four decades.

“Even if there are cases that are wending their way to the court, there will not be a successful challenge to Roe until we can count to five,” Ms. Balch said, referring to the number of Supreme Court votes needed to overturn Roe v. Wade.