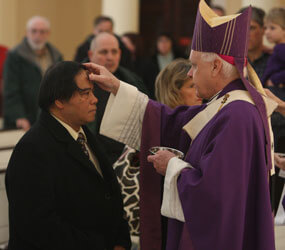 VATICAN CITY – The Lenten season calls Christians to strip themselves of evil, superficiality and lukewarm morality and to turn themselves fully over to Jesus Christ, said Pope Benedict XVI.

“Conversion means to change the direction in life’s journey, not by making tiny adjustments, but by an authentic and real about-face,” he said during his weekly general audience Feb. 17, Ash Wednesday.

“The call for conversion strips bare and denounces the easy superficiality that very often characterizes our way of life,” he said.

“Conversion is to go against the current where the current is a lifestyle that is superficial, inconsistent, disillusioned, and which often tramples us, reigns over us and makes us slaves to evil or, in any case, prisoners of mediocre morals,” he said.

Beginning his Ash Wednesday observance with the general audience, the pope told an estimated 6,500 visitors that Lent, in the words of St. Paul, reminds people “not to accept the grace of God in vain,” but to recognize that God is calling everyone to penance and spiritual renewal every day.

When life seems exhausting and fraught with difficulties and failure, and when one is tempted to abandon the faith, it is a call to “open ourselves up to God’s love in Christ and to live according to his logic of justice and love,” he said.

When people receive ashes, the priest tells them either “Turn away from sin and be faithful to the Gospel” or “Remember that you are dust and to dust you shall return,” he said.

To turn away from sin and believe in the Gospel are not two different things, he said; they express the need to completely turn over one’s life to the Gospel by “freely answering to Christ who offers humanity the way, the truth and the life.” Only through Jesus can a person be saved and free, he said.

The words “you are dust and to dust you shall return” remind people of their human fragility and mortality, especially in cultures that tend to censor the human experience of death, he said.

In the evening, Pope Benedict led the traditional Ash Wednesday procession on Rome’s Aventine Hill from the Church of St. Anselm to the Church of Santa Sabina, where he celebrated Mass and received ashes on the top of his head from Cardinal Jozef Tomko, retired prefect of the Congregation for the Evangelization of Peoples.

Human beings can recognize and respond to God’s voice, but they also can disobey God, the pope said.

“The origin of every material and social injustice is that which the Bible calls ‘iniquity’ or sin, which basically consists in disobeying God” and not responding to his love, he said.

The first step to restoring justice in the world is to repent of one’s personal sins and sincerely seek to live according to God’s will, the pope said.

The reward for repentance and good works, the pope said, “is not the admiration of others, but friendship with God and the grace that comes with it, a grace that gives peace and the strength to do good, to love even those who don’t deserve it and to forgive those who have offended us.”

The text of the pope’s audience remarks in English is posted online at:
www.vatican.va/holy_father/benedict_xvi/audiences/2010/documents/hf_ben-xvi_aud_20100217_en.html.

The text of the pope’s audience remarks in Spanish is posted online at: www.vatican.va/holy_father/benedict_xvi/audiences/2010/documents/hf_ben-xvi_aud_20100217_sp.html.