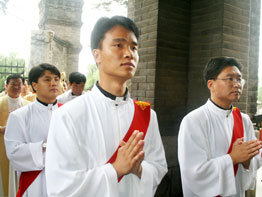 HONG KONG – A year after Pope Benedict XVI’s letter to mainland Chinese Catholics, church leaders said some positive developments have resulted but more work needs to be done to achieve the letter’s objectives.

In eastern China’s Zhejiang province, Bishop Xu Honggen of Suzhou told the Asian church news agency UCA News his diocese has engaged in dialogue with two priests working semiclandestinely there. The priests now have agreed to work openly with government approval, he said.

Referring to a point in the papal letter that says, “every cleric must be incardinated in a particular church or in an institute of consecrated life and must exercise his own ministry in communion with the diocesan bishop,” he said the registered church community sees no problem in this.

However, he noted that in some places, some underground clergy still work in areas outside their dioceses. The Vatican’s China commission should address this matter to avoid conflicts, he said.

Bishop Hu said he believes unity between the registered and unregistered church communities “would move much more easily once the Vatican and China build ties.”

In Tianjin Diocese, which has no registered bishop, most priests operating with knowledge of the government pledged obedience to unregistered Bishop Stephen Li Side of Tianjin earlier this year, according to church sources. Bishop Li has allowed those priests to continue to administer their parishes.

A clandestine Tianjin Catholic identified only as Teresa told UCA News more underground Catholics are attending Masses in Xikai Cathedral, at which government-approved priests preside, and fewer are praying at the Marian grotto outside. Previously, many Catholics refused to enter the cathedral.

However, another Tianjin Catholic said the local church is “still under the control” of clergy with links to the Chinese Catholic Patriotic Association, which acts as a liaison between the registered Catholic churches and the State Administration for Religious Affairs.

Retired Bishop Pius Jin Peixian of Liaoning told UCA News unity will be difficult to achieve unless clandestine Catholics stop discriminating against their government-approved counterparts. He said he feels the recommendations the pope made in his letter are difficult to implement and so have not changed the church in China much.

In Hong Kong, Anthony Lam Sui-ki, senior researcher of the diocesan Holy Spirit Study Center, told UCA News that although not everyone is following the letter’s guidelines, it has at least laid down some long-term rules. It also has allowed the Chinese government to understand the church’s vision and principles of its structure, he said.

While Lam stressed the letter does not call for unity in the structures of the church in China, he said he sees some attempt at “communion,” with clandestine Catholics now seeming “less resistant about joining the liturgy” in the government-approved church.

Meanwhile, an article posted by “Firebug” on a mainland Catholic Web site says that if the pope insists that a church independent of the Holy See is incompatible with church doctrine, the Vatican should re-emphasize that legitimate bishops should make their status known publicly.

The writer of “Commemoration of the Anniversary of the Pope’s Letter” regards the papal letter as ambiguous on all important issues, allowing everyone to use it to support her or his own stance.

The papal letter, released June 30, 2007, acknowledged the difficulties Chinese Catholics have faced in relations with their government as well as among themselves, while encouraging reconciliation between the two Catholic communities. It also announced the revocation of all prior pastoral directives previously granted to address pastoral necessities in difficult times.