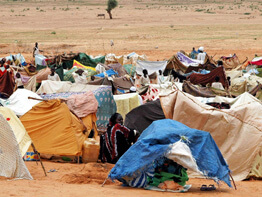 WASHINGTON (CNS) – A church aid worker in Darfur said 2006 was tough for humanitarian workers but noted that the United States and United Nations have increased their efforts in the western Sudanese region.

Mark Snyder, head of the North Sudan program for Catholic Relief Services, the U.S. bishops’ international aid and development agency, said U.N. observers and logistical staff have been deployed to Darfur. The Sudanese government has agreed to set up a “protection force,” he said, without providing further detail.

The U.S. “is by far the largest donor contributing emergency services,” he said in response to journalists’ questions during a conference call from CRS headquarters in Baltimore Jan. 10. Mr. Snyder has been based in the Sudanese capital, Khartoum, since 2005; CRS has been working in the region since 2004.

The conflict in Darfur began nearly four years ago, when rebel forces attacked the government because they thought the government was neglecting the region politically and economically. Humanitarian efforts have been blocked by violent clashes that involve government forces; government-backed Arab militia, or Janjaweed; and rebel groups, some of whom fight among themselves.

The Janjaweed militias are especially notorious for pillaging villages and raping women.

In May 2006, a cease-fire agreement between the government and one rebel faction was reached, but deadlines have been ignored.

The situation has become more complex as violence increases then wanes. Nongovernmental organizations estimate that more than 400,000 people have been killed, and more than 2 million civilians have been displaced – some live in camps in Darfur while others have fled to neighboring Chad.

In areas where the situation is more stable, CRS has been working to train students to work so they can return to their homes. The Khartoum vocational program has successfully trained and facilitated the return of more than 300 displaced students to their homes in southern Darfur, Mr. Snyder said.

Meanwhile, the violence and ground fighting that increased in 2006 kept CRS from reaching some people in need, and many of the programs suffered, Snyder said.

But, he added, the group food distribution program was successful because of CRS’ strategy of coordinating local leaders and the U.N. World Food Program. The local leaders distribute the food packages to families, he said.

CRS and its mostly Sudanese staff of 125 members assist any Sudanese, regardless of beliefs, with water sanitation, schools and health education, Mr. Snyder said.