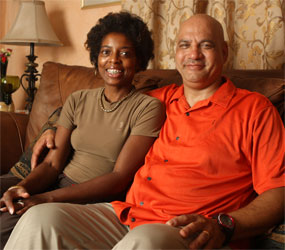 A lament from the Vietnam era was that American soldiers were rarely honored upon their return. Many were treated with disdain, as protesters against the war lumped them in with the White House and Pentagon brass.

The Veterans Affairs (VA) Maryland Health Care System and the Baltimore Orioles will sponsor a third annual Welcome Home Celebration Aug. 30 at Camden Yards, before a 1:30 p.m. game against the Cleveland Indians.

More than 650 veterans, ranging in age from 20 to 65, of Iraq and Afghanistan will be honored. Representatives from five branches of the U.S. Military will be singled out in pre-game ceremonies, and it is sure to be an emotional moment for at least one of them, U.S. Army Intelligence Captain Robert Lake.
Lake, 47, is not at liberty to discuss the classified work he did during two tours in Iraq. The first came in 1991, during Desert Shield/Desert Storm. The second came in 2006-07, when he was unexpectedly returned to active duty.

Lake, who is being treated for memory and re-adjustment issues, hesitates when asked about his commendations.

Conversing on other topics comes easier.

His compassion was evident when VA officials asked him to describe the hardest aspect of his service in Iraq. His response? Watching men in his unit react to “Dear John” letters.

He is quick to quote the 21st Psalm and Ephesians 6:12: “For our struggle is not with flesh and blood, but with the principalities, with the powers, with the world rulers of this present darkness, with the evil spirits in the heavens.”

Faith, family and country are vital to Lake, the middle man in three generations whom he said enlisted in the ROTC program at Morgan State University in Baltimore.

“I always thought about what my dad would say,” Lake said, explaining his reaction to his second tour in Iraq after a lengthy stretch of inactive duty. “When your commander in chief calls, you don’t question.”

He was born in 1962, in Kaiserslauten, Germany, where his father, a member of the U.S. Army Air Corps who served during World War II and Korea, married a local.

“To watch two peoples who had been enemies come together as a family was interesting as a kid,” Lake said.

Lake’s son, Elijah, the Morgan State freshman, attended St. Anthony of Padua School in Baltimore and was in the Class of 2009 at Towson Catholic High School, another since-closed school. Victoria, his daughter, is in the upper grades at Immaculate Heart of Mary School in Baynesville.

His children and wife, Felicia, will be in attendance at Camden Yards Aug. 30.

“I’m grateful for the mass gathering,” Lake said, “but there’s nothing like seeing your family again.”

His program manager at the VA is U.S. Army Medical Service Corps Capt. Christopher Buser, an Anne Arundel County native who was raised at Holy Family Parish in Davidsonville.

“We want to integrate (veterans) into the community, to be as successful and productive as possible,” Buser said.
The Aug. 30 Welcome Home Ceremony at Oriole Park at Camden Yards supports that mission. All veterans and active duty military with valid ID (VA Health ID card, military ID or Veterans Service Organization card), and their guests, can purchase upper reserve and left field upper reserve tickets for $5.