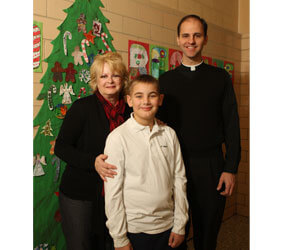 As Christmas approaches, The Catholic Review highlights two stories of generosity in this season of giving.

When Edward Stromberg III’s dog tries to wake him up with a lick to the face, Stromberg normally just pushes the friendly Golden Labrador aside.

This time was different.

“Honey” kept licking the 9-year-old’s face, barking with a sense of urgency. The Stromberg house was on fire Sept. 21 and the dog was intent on rescuing her companion, a fourth-grader at St. Agnes School in Catonsville.

“It was really scary,” remembered Stromberg, who ran downstairs to awaken Joe Moreland, a friend of the family. Stromberg’s parents, Heather and Edward Stromberg Jr. weren’t home at the time.

While everyone made it out safely, the Stromberg family lost everything. That’s when local Catholics stepped up to give them support.

“The first phone call we got after the fire was from St. Agnes parish asking what they could do to help,” said Edward Stromberg Jr. “The pastor called, then the principal, then someone from the board of directors. I’ve never heard of anything like that. It was really heart-wrenching.”

Susan Banks, principal, remembered that members of the student council asked if they could delay a scheduled fundraiser for children with cancer – instead collecting donations for the Strombergs. The administrator agreed and the children raised more than $4,700 within two days.

“I think we consider ourselves a family at our schools,” Banks said, “and we want to help each other. It was really nice to be able to help one of our own.”

The family is living in temporary housing, using much of the donated money to go toward the repair of their destroyed home while awaiting an insurance settlement.

Heather Stromberg said this Christmas will be very special for her family.

“We’re all very thankful for what everyone has done,” she said. “I never could have dreamed that so many people care so much.”

All Richard Mugabo wanted was to see his family again.

The Rwandan immigrant scrimped and saved every penny he earned working at a Baltimore gas station to cover the expenses of bringing his wife and four children to the United States.

Running out of options and eager to reunite with a family he had not seen in two and a half years, Mugabo paid an October visit to the Immigration Center at St. Matthew, Northwood. He arranged to talk with Father Joseph Muth, pastor.

Touched by the immigrant’s story, Father Muth preached about the man’s plight during a Mass at Notre Dame Preparatory School in Towson, inspiring families to donate $700. The priest preached again during his weekend Masses at St. Matthew, raising another $2,000.

The money would help pay for the plane tickets and also allow Mugabo to move into a larger townhouse for his family.

Eight days before Thanksgiving, Mugabo was reunited with his family at Thurgood Marshall Baltimore Washington International Airport. Father Muth and some St. Matthew parishioners were on hand with donated winter clothes to help the newcomers adjust to a cold climate.

“It was very marvelous,” Mugabo said. “I could not believe it – really. It was a big thing to get my family here. It was so nice.”

Father Muth remembered that Mugabo was overwhelmed with joy at the sight of his family.

“I was almost holding Richard back so he wouldn’t run over and cross the security line,” Father Muth said.

Although Mugabo and his family are not Catholic, they have worshipped at St. Matthew several times since their reunion. They await Christmas with much anticipation.

“It will be marvelous because we are all together after so long,” Mugabo said. “It will be good.”

Father Muth said he hopes to do more for other immigrants in the new year. He remembered praying about immigration several months before meeting Mugabo.

“The Spirit told me to me to pray more boldly about what we do,” he said. “I felt the Spirit asking me to pray to send us broken immigration problems that are too great to handle.”

His prayers were answered.