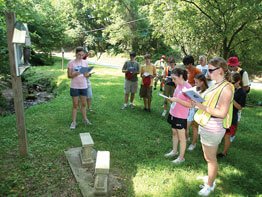 Archbishop Edwin F. O’Brien challenged Baltimore pilgrims at World Youth Day to be a light of information when they return from Sydney, Australia.

“Your job is to communicate this back to the rest of the world,” Archbishop O’Brien told 46 delegates from the archdiocese and 31 representatives from Mount de Sales Academy, Catonsville, July 20 in Sydney. “Pilgrimage is but one step in a very long road.”

Almost immediately after their interaction with Archbishop O’Brien, representatives from Mount de Sales called their principal, Sister Elizabeth Anne Allen, O.P., to tell her about the meeting.

“That meant a lot to them, because he’s their archbishop too,” Sister Elizabeth Anne said.

While American media focused on the smaller-than-usual turnout for World Youth Day, Archbishop O’Brien told the teens and young adults in Sydney he was overwhelmed by the intensity of the participants in Australia.

His observation was not lost on enthusiastic travelers from the archdiocese, who joined with 4,000 other young Catholics from the U.S. at a July 19 Mass at The Domain, a large open space in Sydney.

During the Mass for those from the United States, several Baltimore pilgrims served as altar servers and sacristans. Being participatory, young people learned, was not a bad thing.

“We must pass on our faith to other young people, and we must pass along the message that it is OK to be fully active in the church, that we find the church to be alive and young,” Megan Barkley of St. Veronica, Cherry Hill, said.

(Megan’s comments, along with those of other pilgrims and Archbishop O’Brien in this story, were supplied by the Archdiocese of Baltimore’s Division of Youth and Young Adult Ministry).

The youth gathered once again for the emotional farewell Mass celebrated by Pope Benedict XVI July 20 attended by 350,000 people. Twenty-four young people from around the world were confirmed, which many from Baltimore said was a highlight of the Mass.

During his homily, the pope said: “Do not be afraid to say ‘yes,’ to Jesus, to find your joy in doing his will, giving yourself completely to the pursuit of holiness.”

It’s a message that rang true for many in the Baltimore delegation.

“I wanted to come here so that I might have a greater confidence in my faith,” Chelsea Corriveau of St. Louis in Clarksville, said. “It has been strengthened by the witness of so many others gathered.”

Others, like David Burkey of St. Ann, Hagerstown, were struck by the pope’s message about the Holy Spirit.

“The pope described the Holy Spirit as ‘God in love,’” David said. “He reminds young people that we keep the church young.”

Marveling at the sheer magnitude of the gathering for the final Mass, Archbishop O’Brien told Baltimore teens he had heard someone wonder aloud: ‘Who else, but the Catholic Church, could have brought so many people together?’

Sister Elizabeth Anne said students who traveled will be counted on to bring that communal spirit of World Youth Day home. Using United States and Australian flags from their trip, the school’s pilgrims will lead its first assembly of the school year in the fall. The goal, she said, is to make the trip tangible for non-travelers.

“Everyone was included, whether they went or not,” Sister Elizabeth Anne said of the Mount de Sales student body. “It’s a wonderful way to start the year.”

Many from Baltimore will return to the U.S. physically tired after over a week of walking many miles to be at various spots around Sydney. Baltimore’s young were spiritually replenished, however, by candlelight prayer vigils, nights spent under the stars and the feeling they were apart of something bigger than themselves.

“I know that as a Christian, we are supposed to share the good news,” Katherine Erskine of St. Louis, Clarksville, said. “I have been comforted by the theme that we are to receive the power of the Holy Spirit, as well as Pope Benedict’s encouragement that we do have a mission.”