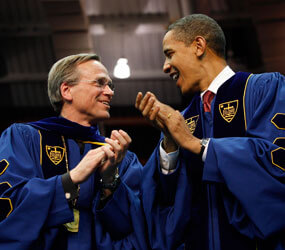 WASHINGTON – An ongoing debate about U.S. Catholic institutions of higher education maintaining their Catholic identity escalated in 2009 when the University of Notre Dame in Indiana invited President Barack Obama to deliver the commencement address.

Holy Cross Father John I. Jenkins, Notre Dame’s president, was heavily criticized for inviting the president to speak at the May graduation and to receive an honorary law degree.

At least 70 U.S. bishops and other critics said Obama’s support of legal abortion and embryonic stem-cell research made him an inappropriate choice to be commencement speaker at a Catholic university.

The decision also ignited a national debate on the university’s status as a Catholic institution.

Some critics called for the invitation to be rescinded and for Father Jenkins to resign as president. But he and other university officials stood firm, saying Notre Dame was not condoning Obama’s stand on abortion or embryonic stem-cell research and that the university’s students should be honored to have the first black U.S. president speak during their graduation.

The debate continued in the Catholic and secular press, on radio and television airwaves, and in the blogosphere.

Some religious commentators said Notre Dame had forsaken its Catholic identity, and others accused those bishops and others who opposed Obama’s appearance on campus of participating in partisan politics at the expense of the free exchange of ideas on Catholic campuses.

Protesters picketed the campus for weeks before the ceremony. Angry alumni of the university called on fellow alumni to withhold financial donations if the school didn’t rescind the Obama invitation.

Mary Ann Glendon, former U.S. ambassador to the Vatican, turned down the university’s prestigious Laetare Medal, citing concerns about Notre Dame honoring the president despite his views on “fundamental principles of justice” that are contrary to Catholic teaching.

Obama delivered the May 17 commencement address, calling for mutual respect for different opinions and dialogue on abortion. He also received the honorary degree.

Father Jenkins was not fired, did not resign and later in the year was elected to a second five-year term by the university’s board of trustees.

Bishop John M. D’Arcy, who until his retirement in November headed Fort Wayne-South Bend, Ind., the diocese in which Notre Dame is located, boycotted the commencement, saying the university’s decision to honor Obama had caused a “terrible breach … between Notre Dame and the church.”

During executive session at their June meeting in San Antonio, the U.S. bishops expressed “appreciation and support” for Bishop D’Arcy, especially for “his pastoral concern” for Notre Dame. The two-sentence statement made no direct reference to Obama at Notre Dame.

Retired Archbishop John R. Quinn of San Francisco said in an article he wrote for America magazine that he felt the U.S. bishops’ response to the controversy “communicated several false and unintended messages” to the U.S. public.

He said it showed the bishops “function as partisan political actors in American life” and are “ratifying the ‘culture war mentality,’ which corrodes debate both in American politics and in the internal life of the church”; and that they are “effectively indifferent to all grave evils other than abortion.”

In the case of Obama, he said, the bishops also seemed “insensitive to the heritage and the continuing existence of racism in America.”

Archbishop Quinn urged the U.S. hierarchy to follow the “policy of cordiality” practiced by the Vatican, which “proceeds from the conviction that the integrity of Catholic teaching can never be sacrificed” but “consistently favors engagement over confrontation.”

Archbishop Michael J. Sheehan of Santa Fe, N.M., said he believed the majority of U.S. bishops agreed with him that “we don’t want to isolate ourselves from the rest of America by our strong views on abortion and the other things. We need to be building bridges, not burning them.”

“To make a big scene about Obama – I think a lot of the enemies of the church are delighted to see all that,” Archbishop Sheehan said in an interview with the National Catholic Reporter.

At the bishops’ executive session in June, he said, he spoke strongly against those who opposed the university’s granting of an honorary degree to Obama.

“I said we’ve gotten more done on the pro-life issue in New Mexico by talking to people who don’t agree with us on everything,” he said. “We got Gov. (Bill) Richardson to sign off on the abolition of the death penalty for New Mexico. … But you know, he’s pro-abortion. So? It doesn’t mean we sit and wait, that we sit on the sides and not talk to him.”

In a separate article published in America, Bishop D’Arcy said his boycott of the Notre Dame commencement ceremonies arose from his responsibility to see that Catholic universities “give public witness to the fullness of Catholic faith.”

Bishop D’Arcy said the controversy was not about Obama, a replay of the 2008 elections or “whether it is appropriate for the president of the United States to speak at Notre Dame or any great Catholic university on the pressing issues of the day.”

The central question, Bishop D’Arcy said, is: “Does a Catholic university have the responsibility to give witness to the Catholic faith and to the consequences of that faith by its actions and decisions – especially by a decision to confer its highest honor?”

Bishop D’Arcy said that, in his 24 years as head of the Fort Wayne-South Bend Diocese, he “never interfered in the internal governance of Notre Dame or any other institution of higher learning within the diocese.”

But he said a bishop “must be concerned that Catholic institutions do not succumb to the secular culture, making decisions that appear to many, including ordinary Catholics, as a surrender to a culture opposed to the truth about life and love.”