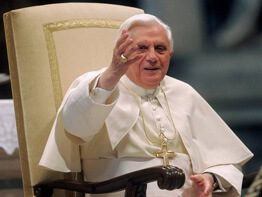 The Vatican will be a busy place throughout the year, with hundreds of papal meetings, liturgies and other events already scheduled and several documents in the pipeline.

The pope will make at least two foreign trips, including his first intercontinental journey, and sometime during the year is likely to name another batch of new cardinals.

The year begins with a spate of traditional papal Masses and meetings, including a “state of the world” address to the world’s diplomatic corps in mid-January.

The diplomats speech is prominently covered by the international media. That is not true of more routine papal meetings that also gear up in January, including “ad limina” visits by groups of bishops from around the globe.

The “ad limina” visits have undergone a quiet revolution in recent years, and it’s evident in the pope’s 2007 schedule. Canon law says the visits, by heads of dioceses to report on the status of their dioceses, should take place every five years, but that interval is now anywhere from six to nine years; many of the bishops coming in 2007 made their last visits eight years ago.

There are several reasons for the change. One is the simple fact that the number of the world’s bishops has approximately doubled over the last 50 years. Another is that when Pope John Paul II was ill during the last years of his pontificate, he was unable to keep up the pace of “ad limina” meetings, and a backlog developed.

Today, even with a healthy pope, it’s doubtful the Vatican can get back to the five-year schedule, one Vatican source said. The pope would have to meet with 540 bishops a year; last year, he met with 360.

Pope Benedict plans to travel to Brazil in mid-May to open a meeting of the Latin American bishops’ council, or CELAM, and to Austria in September for a Marian pilgrimage. The Brazil trip is his first across an ocean, and Vatican planners are doing all they can to keep it short and sweet.

There’s also a chance the pope may visit the United Nations. An informal invitation has been floated and the pope is said to be considering it — the most likely hypothesis would be a visit in late September to address the opening of the U.N. General Assembly.

“The door is open, and the idea is circulating, but nothing’s been decided yet,” one Vatican official said.

The pope’s native Germany also wants him back for another visit, this time in the capital Berlin. Other invitations have come from the Middle East and Africa, but trips there are considered less probable. He’ll make several trips in Italy, including a pilgrimage in June to Assisi, the birthplace of St. Francis.

The pope, who turns 80 in May, plans sometime in the spring to publish his book, “Jesus of Nazareth: From His Baptism to His Transfiguration,” a work aimed at bringing a vivid portrait of Jesus to a wide audience.

Before then, other papal documents are expected to arrive; they include a post-synodal apostolic exhortation on the Eucharist and, according to Vatican sources, a document issued “motu proprio” (on his own initiative) that would expand permission to use the pre-Vatican II Tridentine Mass.

Sometime early in the year will appear a preparatory document for the 2008 Synod of Bishops on “The Word of God in the Life and Mission of the Church.”

Candidates for the red hat include heads of major archdioceses like Dublin, Paris, Washington, Toronto and Warsaw, as well as a handful of Vatican officials. But some believe the pope may look particularly to Africa, in an effort for more geographical balance, and to Brazil — the country with the world’s largest Catholic population but with only three cardinal-electors.

The pope recently approved decrees on sainthood causes, paving the way for the canonization of four new saints, probably sometime during 2007.

By the end of the year, Vatican sources said, an important dossier may also land on the pope’s desk. Following preliminary approval by commissions of historians and theologians, the cardinal and bishop members of the Congregation for Saints’ Causes are expected to examine the cause of Pope Pius XII, whose role during World War II has long been hotly debated between church officials and some Jewish groups.

After sifting through the documentation, the congregation will offer its definitive opinion, sending it on to the pope for a final decision.