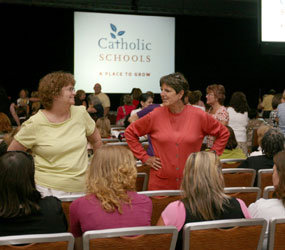 Before they give their first quiz or grade their first paper of the new academic year, more than 2,000 Catholic schoolteachers and administrators gathered at the Baltimore Convention Center Aug. 22 to pray, celebrate milestones and grow in professional development at the inaugural Convocation of Catholic Schools.

In a videotaped message, Archbishop Edwin F. O’Brien thanked the educators for their commitment and sacrifice.

Teachers are on the “frontlines” every day, he said, in classrooms, at pick-up and drop-off of students, at parent conferences, tutoring students before and after school, and working into the night on lesson plans and grading student papers.

“Your labors do not go unnoticed,” Archbishop O’Brien said, “nor do they go unappreciated. The well-known success of our schools and our students reflect your dedication and hard work.”

The archbishop, who could not attend the convocation because he was returning from World Youth Day in Spain, urged educators to “never lose sight of the privilege and responsibility that is ours as stewards of this Catholic school system.” He noted that St. Elizabeth Ann Seton and Mother Mary Lange served as catalysts in the creation of the Catholic school system as it is known today. The U.S. bishops laid the foundation of the American Catholic school system more than 125 years ago at the Basilica of the National Shrine of the Assumption of the Blessed Virgin Mary in Baltimore, he said.

“Although much has changed in the years since,” he said, “one thing that has remained constant is the commitment of our educators and their deeply held belief in the transformative power of education in the life of the child.”

In his homily during an opening Mass, Bishop Denis J. Madden said teachers have a profound impact on children.

“The minds and souls of your students will grow because they met you,” he said. “They were fortunate enough to hear your voices, to see your face, to look into your eyes.”

Surrounded by love in their teachers’ classrooms, students will “also come to learn a profound secret that’s really no secret at all: the key to life and joy lies in service to others,” Bishop Madden said.

“When we begin to experience the joy of service, then we are happy,” he said.

Catholic educators with a long history of service were honored during the convocation. Those celebrating milestones of 10, 15, 20, 25, 30, 35, 40, 45 and 50 years in the system were recognized. Sister of Notre Dame de Namur Lois Blessing of St. Louis School in Clarksville and School Sister of Notre Dame Aloysius Norman of St. Mary School in Hagerstown were each honored for a half century of service.

Six teaching excellence awards were announced, and the Doris Musil Award – the highest education honor given in the archdiocese – was presented to Sister of Notre Dame de Namur Shawn Marie Maguire. Sister Shawn, the longtime president and headmistress of Maryvale Preparatory School in Brooklandville, announced that she is stepping down at the end of this school year.

Caught by surprise by the honor, Sister Shawn said she was speechless as educators gave her a standing ovation.

Dr. Barbara McGraw Edmondson, superintendent of Catholic schools, told The Catholic Review that Sister Shawn was nominated by her faculty. Sister Shawn has ministered in the archdiocese for five decades, Dr. Edmondson said.

“She is just the kind of person that no matter where she goes, she supports people, she encourages people and she just loves being a part of Catholic education,” Edmondson said.

In his keynote address, Todd Whitaker, professor of educational leadership at Indiana State University, encouraged educators to take a positive approach in their ministry – every day, all the time. Treat every student with respect, he said, and never argue, yell or use sarcasm.

Whitaker noted that when there are two “bad kids” walking down the hallway, some teachers respond by peppering them with questions about why they aren’t in class. Conversely, when the valedictorian and salutatorian walk down the hall, teachers say hello and ask them how they are doing.

“We have to figure out a way to treat everyone as if they are good,” Whitaker said.

Jeff Bunn, a teacher at Our Lady of Mount Carmel High School in Essex, welcomed the opportunity to come together with fellow educators at the beginning of the academic year.

“This helps you get started and focused for the year,” he said. “It’s always challenging – especially with new teachers and the consolidation we’ve gone through. It shows us we’re valued.”

For more on Whitaker’s keynote address and to listen to clips of his talk, visit www.tinyurl.com/wgmk11.