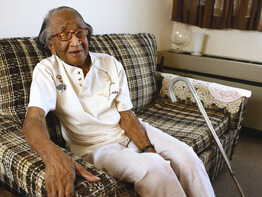 Following a special Mass at St. Gregory the Great, Baltimore, in honor of her 100th birthday, Ella Byrd told well-wishers she may have lived through a century of history, but looks forward to events in the future that one day will be deemed historic.
“As I look back, I see that we’ve made a lot of progress in making things fair and equal,” said the sprightly Sandtown-Winchester resident, who turned 100 Aug. 24. “But more needs to be done. I told my friends I’m starting my next 100 years now and can’t wait to see where we go from here.”
When Ms. Byrd was born in the summer of 1907, women in the United States didn’t have the right to vote and the civil rights movement wouldn’t take place for the next 50 years.
During the course of the next 100 years, Ms. Byrd would enjoy the spoils of her ever-evolving nation, become a community activist, entrenched in the Democratic Party, and participate in the legislative process as an elections judge.
Growing up as a Baptist in West Baltimore, she attended school at Mount Street School #100 on West Saratoga Street until the sixth grade and – like many black girls during the early part of the 20th century – discontinued her education.
After marrying Ellis Byrd in 1925, Ms. Byrd gave birth to her only child – Brenda – and spent the next 50 years earning a living as a domestic worker, which included housekeeping, ironing, laundry and babysitting.
“She may only have a sixth-grade education, but she continued exercising her mind,” said Brenda Rigby, Ms. Byrd’s daughter. “She reads all of the time and stays up with what is going on in the world.”
Ms. Byrd read with interest as the civil rights movement amplified in the 1960s and was struck with disbelief when Martin Luther King Jr. was killed.
“I think that moved me more than anything else in the last 100 years,” she said. “I just couldn’t believe it.”
The slain civil rights leader’s legacy also inspired Ms. Byrd – who by then was a widow – to become a community activist for such causes as public safety and fair and affordable housing, and then spent the next three decades as an election judge.
In the early 1970s she also decided to convert to Catholicism, something her daughter had done some two decades earlier.
“I never felt very connected to the Baptist church,” Ms. Byrd said. “I started going to St. Gregory the Great with my daughter, and I felt so much at home there. So, converting just seemed like the natural thing to do.”
Becoming active in her parish, she continues an energetic membership in the church’s Golden Ages senior citizens group and partakes in its many bus trips to regional destinations.
With the exception of arthritis, Ms. Byrd is in excellent shape, nimbly walks with the aid of a cane, hears with the accuracy of a cat and can rattle off the names of her two grandsons and six great-grandchildren with ease.
“I’ve been blessed with good health, but I have no plans but to just stay healthy and look forward to living day to day,” she said. “I never expected I’d live this long. My mother passed when she was 62 and the last of my (five) brothers and sisters died last year. I look at each day as a gift.”