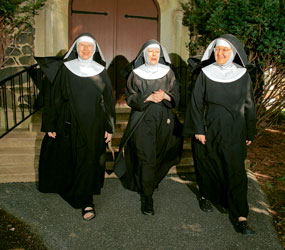 After seven years of prayer and discernment, a community of Episcopal nuns and their chaplain will be received into the Roman Catholic Church during a Sept. 3 Mass celebrated by Archbishop Edwin F. O’Brien.

The archbishop will welcome 10 sisters from the Society of All Saints’ Sisters of the Poor when he administers the sacrament of confirmation and the sisters renew their vows of poverty, chastity and obedience in the chapel of their Catonsville convent.

Episcopal Father Warren Tanghe will also be received into the church and is discerning the possibility of becoming a Catholic priest.

Mother Christina Christie, superior of the religious community, said the sisters are “very excited” about joining the Catholic Church and have been closely studying the church’s teachings for years. Two Episcopal nuns who have decided not to become Catholic will continue to live and minister alongside their soon-to-be Catholic sisters. Members of the community range in age from 59 to 94.

“For us, this is a journey of confirmation,” Mother Christina said. “We felt God was leading us in this direction for a long time.”

Wearing full habits with black veils and white wimples that cover their heads, the sisters have been a visible beacon of hope in Catonsville for decades.

The American branch of a society founded in England, the All Saints’ Sisters of the Poor came to Baltimore in 1872 and have been at their current location since 1917.

In addition to devoting their lives to a rigorous daily prayer regimen, the sisters offer religious retreats, visit people in hospice care and maintain a Scriptorium where they design religious cards to inspire others in the faith.

Throughout their history, the sisters worked with the poor of Baltimore as part of their charism of hospitality. Some of that work has included reaching out to children with special needs and ministering to AIDS patients. Together with Mount Calvary Church, an Episcopal parish in Baltimore, the sisters co-founded a hospice called the Joseph Richey House in 1987.

Orthodoxy and unity were key reasons the sisters were attracted to the Catholic faith. Many of them were troubled by the Episcopal Church’s approval of women’s ordination, the ordination of a gay bishop and what they regarded as lax stances on moral issues.

“We kept thinking we could help by being a witness for orthodoxy,” said Sister Mary Joan Walker, the community’s archivist.

Mother Christina said that effort “was not as helpful as we had hoped it would be.”

“People who did not know us looked at us as if we were in agreement with what had been going on (in the Episcopal Church),” she said. “By staying put and not doing anything, we were sending a message which was not correct.”

Before deciding to enter the Catholic Church, the sisters had explored Episcopal splinter groups and other Christian denominations. Mother Christina noted that the sisters had independently contemplated joining the Catholic Church without the others knowing. When they found out that most of them were considering the same move, they took it as a sign from God and reached out to Archbishop O’Brien.

“This is very much the work of the Holy Spirit,” Mother Christina said.

The sisters acknowledged it hasn’t been easy leaving the Episcopal Church, for which they expressed great affection. Some of their friends have been hurt by their pending departure, they said.

“Some feel we are abandoning the fight to maintain orthodoxy,” said Sister Emily Ann Lindsey. “We’re not. We’re doing it in another realm right now.”

The sisters have spent much of the past year studying the documents of the Second Vatican Council. They said there were few theological stumbling blocks to entering the church, although some had initial difficulty with the concept of papal infallibility.

In addition to worshipping in the Latin rite, the sisters are expected to receive permission to attend Mass celebrated in the Anglican-use rite – a liturgy that adapts many of the prayers from the Episcopal tradition. Mother Christina said 10 archdiocesan priests, including Auxiliary Bishop Denis J. Madden, have stepped forward to learn how to celebrate the Anglican-use Mass.

The sisters expressed deep affection for Pope Benedict XVI. The pope exercises an authority that Episcopal leaders do not, they said. The unity that Christ called for can be found in the Catholic Church under the leadership of the pope, they said.

“Unity is right in the midst of all this,” said Sister Catherine Grace Bowen. “That is the main thrust.”

The sisters noted with a laugh that their love for the pope is evident in the name they chose for their recently adopted cat, “Benedict XVII” – a feline friend they lovingly call “His Furyness.”
Click here to read how the Episcopal sisters hope to form ‘diocesan institute.’
Click here to see a slide show of the All Saints’ Sisters of the Poor.