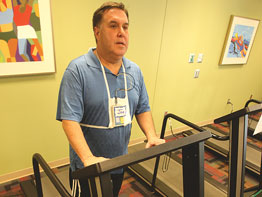 Joseph Roberts says he’s still around because of a miracle – or maybe two or three.

He knows this, he says, only because of what he’s been told about how he almost died last October.

He doesn’t remember suffering a heart attack in the bleachers at Loyola Blakefield in Towson, where he had come to watch his son David play soccer for Archbishop Curley High School, Baltimore.

He doesn’t remember slumping over unconscious or Loyola coach Don Kraft and parents using CPR and an automated electronic defibrillator to get his heart pumping again.

He doesn’t remember the emergency room doctors at St. Joseph Medical Center in Towson, who feared he was dead but revived him.

He doesn’t remember the stent being put into his left artery or his body being chilled to about 32 degrees for 24 hours through induced hypothermia to save brain function while he was shocked back to life.

Today, Mr. Roberts, 51, a bricklayer who lives in Rosedale, says he believes God had good reason for keeping him alive.

Dr. Mark Midei, director of the Cardiac Catheterization Lab at St. Joseph, was among the physicians who cared for Mr. Roberts.

“It’s pretty extraordinary that he survived,” Dr. Midei said. “I’ve been doing this for 25 years now, and he’s among the sickest who have made it – who have lived.”

To reduce Mr. Roberts’ body temperature, St. Joseph doctors used IV fluids, a cooling blanket and ice packing, then placed him on a ventilator to control his breathing.

When he awakened, they brought his body back to room temperature naturally, and he had no brain damage. (Hypothermia lessens the brain’s metabolic demands.)

Once he was strong enough, doctors did quadruple bypass surgery.

“The patients you remember the best are the ones in whom the stakes are the highest and the outcomes are the best,” he said. “The stakes were pretty high.”

Surviving a heart attack has changed his life, said Mr. Roberts, a divorced father of four sons, including two in California from his first marriage, and two from his second marriage, David, 15, and Joey, 18.

The ordeal has strengthened his faith, forced him to rethink his lifestyle, and helped him appreciate so much he had taken for granted, said Mr. Roberts, a parishioner of St. Clement Mary Hofbauer, Rosedale. He eats mostly vegetables, fruits, fish and chicken, but no red meat, and he has cut way back on sugar. He works out three times a week in the St. Joseph Heart Institute. After a time away, he started attending Mass again at his parish. He prays more.

“You just appreciate everything more,” he said. “Materialistic stuff just doesn’t matter. You couldn’t care less about it.”