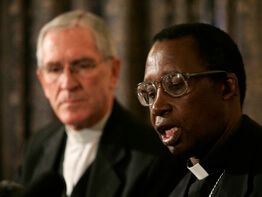 HARARE, Zimbabwe – Zimbabwe’s bishops called attacks on Archbishop Pius Ncube of Bulawayo “outrageous and utterly deplorable” and an attempt to divert attention from the catastrophe that Zimbabwe has become.

“The recent attacks by some politicians and the state media on the person” of Archbishop Ncube, who is being sued for adultery, “constitute an assault on the Catholic Church, to which we take strong exception,” the Zimbabwe Catholic Bishops’ Conference said in an Aug. 29 statement from the capital, Harare.

“The Catholic Church has never been and is not an enemy of Zimbabwe,” the bishops said, noting that the church’s service to Zimbabweans includes running 60 hospitals, 174 schools and many orphanages.
“Our record during the years of the liberation struggle speaks for itself,” they said.

Zimbabwe gained independence from Britain in 1980 after a guerrilla war.

The bishops noted that the archbishop’s case was before the High Court of Zimbabwe in Bulawayo and should not be discussed in public until a verdict has been delivered.

In July, Onesimus Sibanda claimed damages from the archbishop for an alleged affair with his wife, Rosemary Sibanda.

State-run newspapers published photos they said were of Archbishop Ncube and a woman, taken with a concealed camera placed in the archbishop’s bedroom.

“The constitution of Zimbabwe clearly defends the presumption of innocence of an accused person as a legal safeguard for a fair hearing before an impartial tribunal,” the bishops said.

“Acting in complete disregard of these universally respected conventions, the state media obtained and publicized, for days on end, in print and on television, video and photographic material, which violated the most fundamental personal rights of Archbishop Ncube and were utterly offensive to the public,” they said.

“We support him fully in his present painful personal situation and ask all our faithful to remember him in their prayers,” they said.

The bishops listed a litany of problems in their country: “Freedom and fundamental human rights are violated daily with impunity, the shelves of the shops and supermarkets are empty, our currency has become worthless, the public health service has collapsed, the country’s main roads are lined with tens of thousands of citizens waiting for public transport, corruption is rampant and young people are risking their lives daily and in growing numbers to escape the catastrophe that our country has become.”

They said the attempt to divert attention from these events by creating “hate propaganda and character assassination against those Zimbabweans who, like Archbishop Ncube, have spoken out in defense of the oppressed, has not deceived ordinary Zimbabweans.”

Archbishop Ncube “has courageously and with moral authority advocated social justice and political action to overcome the grievous crisis facing our country,” the bishops said.

Zimbabwe is crippled by the highest rate of inflation in the world, unemployment of more than 80 percent, and shortages of foreign currency and fuel. Food shortages are acute, large numbers of people are migrating to the neighboring countries of South Africa and Botswana, and, with elections scheduled for March, political violence has intensified.