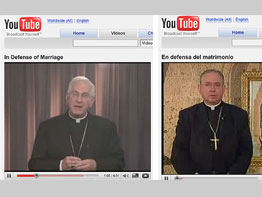 WASHINGTON – As U.S. voters from coast to coast prepared to decide ballot questions related to same-sex marriage Nov. 4, the U.S. bishops took their campaign to keep the traditional definition of marriage as the union of a man and woman to a popular video-sharing Web site, YouTube.

A version of the video in English, online at www.youtube.com/watch?v=Lh_81zsW6U8, features Archbishop Joseph E. Kurtz of Louisville, Ky., chairman of the U.S. Conference of Catholic Bishops’ recently created Ad Hoc Committee for the Defense of Marriage.

Archbishop Jose H. Gomez of San Antonio, chairman of the USCCB Committee on Cultural Diversity in the Church, presents the same message in Spanish online at www.youtube.com/watch?v=IwCAXQhqd-Q.

Both videos also can viewed on the USCCB Web site at www.usccb.org/bishops/marriagedefense.shtml.

The videos were posted online just before Election Day, when voters in California, Arizona and Florida were to face ballot questions that would define marriage as between one woman and one man. Connecticut bishops also have asked Catholics in their state to support a constitutional convention proposal on the ballot, so that a recent state decision permitting same-sex marriage there could be reconsidered.

“Certain groups and individuals are trying to make same-sex unions the equivalent of marriage,” the archbishops said in their videos. “This is a false idea being proposed and, in some cases, imposed by a minority. This is nothing less than the radical redefinition of marriage – denying the truth that it is exclusively the union of a man and a woman.”

The messages warn that if successful “this effort of redefining marriage to include same-sex unions will bring confusion to what marriage actually means. This confusion could spread and have enormous legal consequences for the rearing of children, public education, employment and religious freedom.

“Children would be forced to learn that marriage is merely one kind of loving relationship among many,” they said. “Churches would be prevented from witnessing to and teaching about the necessary and singular role of love between a man and a woman.

“Same-sex unions and marriage are completely different realities,” they continued. “Reaffirming the traditional understanding of marriage is neither discrimination nor the denial of rights.

“Like all people, homosexual persons have the right to be treated with respect and to live in peace with the support of their loved ones,” the archbishops stated. “But it is to the benefit of all members of society that the institution of marriage be preserved as the relationship of a man and a woman that serves the common good in a distinct way. Society needs marriage in order to establish and sustain that basic unit of society in which men and women love each other and transmit life to their children who are the fruit of that love.”

The videos are the latest in a series of activities to emerge from the ad hoc committee; Chicago Cardinal Francis E. George, USCCB president, announced its establishment Oct. 15.