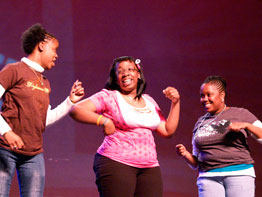 ANAHEIM, Calif. – “Nowhere you’ve been or anything you’ve ever done in your life has taken you more than one step away from Christ,” speaker Steve Angrisano told a sold-out arena of high school students and their chaperones in Anaheim.

The popular Catholic singer and songwriter was addressing the crowd at a Feb. 28 youth day that was part of the Los Angeles archdiocesan Religious Education Congress.

With the theme “About-Face: Focused on God,” the day featured workshops for 15,000 high school students and their chaperones on topics such as chastity; living out the biblical message; apologetics; social justice; celebrating liturgy; exploring a vocational call; being Catholic and having a sense of humor; and even finding the Christian purpose of participating in high school athletics.

The day also included a Mass celebrated in two locations at the Anaheim Convention Center, with Los Angeles Cardinal Roger M. Mahony presiding in the arena and Los Angeles Auxiliary Bishop Oscar A. Solis presiding in one of the nearby halls.

Angrisano was one of the keynote performers to open the daylong event, along with Jesse Manibusan, Doug Brummel and rapper Righteous B, that left students clapping and dancing one minute, and deep in prayer the next.

During the homily in the arena, two students told stories of a moment of conversion in their lives.

Cruz Mesa, a high school senior and a member of St. Louise de Marillac Parish in Covina, said he began feeling himself drift from the fervor of faith he felt as a high school freshman and sophomore.

He said that though he has had a desire to join the military since Sept. 11, 2001, he began to wonder if God still “needed” him.

Mesa then got a call that he was accepted by the U.S. Military Academy in West Point, N.Y., and he also received a call to speak at the congress youth day. He said his good news and receiving the sacrament of reconciliation helped him to see that God didn’t forget about him.

“And he has a mission for each and every one of you,” Mesa said.

Janeeka Perera, a student at Chaminade High School in West Hills, said she felt a change in her faith when she and her family went to Sri Lanka to help victims of the tsunami that struck Dec. 26, 2004.

There, villagers asked if her family would donate shoes to students who needed them. Perera was able to meet the students and she learned that they would have been barred from school had they not had the shoes. She said that moment made her realize how much she had taken for granted as a teenager.

“The villagers opened my eyes to what made God so difficult for me to find,” she said. “An about-face is being able to face God, even if you are not certain where he is, you just have to know, you just have to trust that he is there.”

“God’s love and mercy are always there for us, always calling us back,” Cardinal Mahony said during his homily.

According to Mike Norman, coordinator of youth day for the past 12 years, work on the event starts about a year in advance. The Los Angeles archdiocesan Office of Religious Education staff works with a coordinating team made up of high school students and their chaperones.

The theme comes from the liturgical readings that coincide with the date of youth day. This year, it was a reading from the Book of Jeremiah, Chapter 7, Verses 23-28, about people turning their backs, not their faces, to God.
“One of the kids said that it was like an ‘about-face’ in marching band: No matter what you are doing, you can always turn your face back to God,” Norman said. “And we just all loved that.”

Angrisano, who wrote the theme song for youth day, called “One Step Away,” used information from the meeting to write it. This year is only the third youth day to have an official song specifically customized for the day.

For the first time, youth day included a “vocations lunch” during which 30 students had lunch in small groups with five bishops and five priests as well as religious sisters and brothers.

Chris Saenz, a 16-year-old parishioner from St. Louis of France Church in La Puente, said that he wanted to attend the vocation luncheon because he is considering becoming a missionary to South America or Asia. He was seated next to a Maryknoll sister with whom he had talked about his call at a vocation fair at his parish a few weeks earlier.

“I was fortunate for her to be here,” he said. “Hopefully, I can walk out of here today with a lot more information.”