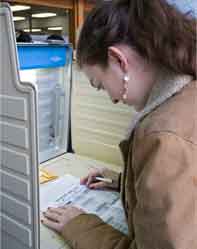 WASHINGTON – In a presidential campaign where young people are being touted as a critical, active bloc of voters, students at Catholic colleges are equally caught up in the election fervor.

Back in the summer, when there were 18 presidential candidates, St. Anselm College in Manchester, N.H., was the first location of two primary debates. It also held two back-to-back debates just days before the New Hampshire primary in early January.

The on-campus debates not only brought hordes of media crews to the campus but also gave students at the small Benedictine college the chance to meet candidates in person and form opinions of them.

In late November the students held a mock primary vote that named U.S. Sen. Barack Obama, D-Ill., and Republican Mitt Romney, former governor of Massachusetts, the presidential contenders. Romney has since dropped out of the race.

The primary in New Hampshire and the Iowa caucuses five days earlier started a trend that has continued in primaries across the country – a surge of young voters that’s been dubbed a political “youthquake.”

In New Hampshire, participation among voters under age 30 was more than double that of the 2004 primary, according to the Center for Information and Research on Civic Learning and Engagement at the University of Maryland. The center also said that in the Iowa caucuses and the Georgia and South Carolina primaries the youth vote was nearly triple that of 2004, and it was quadrupled in Tennessee.

Political commentators say they haven’t seen young people in the United States this involved in the political election process since the 1972 election, just after the voting age was lowered from 21 to 18.

But that bloc of young voters in the ‘70s did not have the technological tools of today’s youths who have been labeled the millennial generation. The new voters, the youngest of whom were born in 1990, are plugged into instant messaging, online social communities such as Facebook and MySpace, cell phones and the Internet to find out more about candidates and also talk with like-minded voters and encourage friends to vote.

Their concerns range from global warming, the economy, health care and the national debt to skyrocketing college tuition, the war in Iraq and immigration.

The majority of these young voters are also optimistic. According to a poll released Feb. 25 by Rock the Vote, a group formed in 1990 to encourage young people to vote, 89 percent of voters in the 18- to 29-year-old age group believe they have the ability to change the country, and 75 percent think their age group is having a greater than usual impact on the election.

This young voter surge and its confident enthusiasm come as no surprise to Gene Beaupre, director of government relations at Jesuit-run Xavier University in Cincinnati.

Beaupre, who has taught political science at Xavier for 30 years, said he has never seen anything like the current wave of young people so interested in the presidential campaign.

In late November, he took a busload of students to Des Moines, Iowa, to spend a weekend in the trenches working with presidential campaigns prior to that state’s caucuses.

During their stay, he said, the students met many of the candidates in person, attended a Democratic debate and did street work for a variety of campaigns that involved making phone calls and getting out and talking to Iowans. Even though they worked hard in the snow, rain and sleet, he said they came back “pumped” for the election campaign.

That enthusiasm has not waned as the students have geared up for the Ohio primaries March 4.

Rae, a junior who is a history and political science major at Jesuit-run Marquette University in Milwaukee, told Catholic News Service Feb. 21 that the overwhelming majority of young people in favor of Obama swayed his decision.

During the Feb. 19 primary in Wisconsin, Rae said 73 percent of 18- to 24-year-olds voted for Obama. On his own campus, students were lined up all day to vote, which is a “testimony,” he said, “that their vote really matters.”

“I think young people really see they have an opportunity to shape what’s happening and they see in Obama that they have a candidate that resonates with them,” he said.

In Arlington, Va., at Marymount University, a school founded by the Religious of the Sacred Heart of Mary, junior Kellen MacBeth has likewise noticed a political “buzz going around especially with primaries.”

MacBeth, who is majoring in politics and hopes to work in foreign policy, is an active member of the College Republicans group on campus. This summer he had an internship in Iowa for the presidential campaign of Sen. Sam Brownback, R-Kan., where he put in seven 13-hour days a week.

Even though Brownback ended his bid for the Republican nomination in October, MacBeth has still been involved in the political process as much as he can through organizing events on campus, including Super Tuesday parties on the biggest day of the primaries for both Republican and Democratic candidates.

The way he sees it, it is crucial for youths to be involved in voting because it “sets the stage for how involved you’ll be for the rest of your life.”

“I definitely think it’s important as young people to put your stake in the ground,” he added.