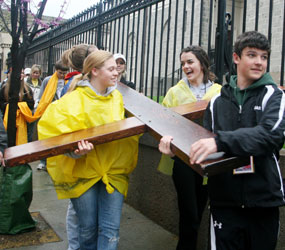 The sky crackled with thunder, lightning danced and wind howled ferociously as rain covered the land, causing the rivers to overflow into the streets.

Yet, more than 1,000 undaunted Catholics trudged through the streets of Baltimore City, carrying a large wooden cross April 16. No burden was too heavy for those attending the 18th annual Youth and Young Adult Pilgrimage. No tornado warning was going to stop them from walking almost three miles from downtown to St. Casimir in Canton for Palm Sunday Mass.

“It makes me understand a little bit better what Jesus went through when he walked for 40 days and 40 nights,” said Kenny Orsot, a 17-year-old parishioner of Baltimore’s St. Francis Xavier.

As the pilgrims arrived at St. Casimir, the staff of the Division of Youth and Young Adult Ministry, which organizes the event, gave high-fives to incoming pilgrims.

“That is what the faith journey is all about, guys,” said Georgina Vaca, coordinator of Hispanic Youth and Young Adult Ministry.

John Schultz, 18, of Sacred Heart in Glyndon, said “it may have seemed dreary, but we all stayed together and pushed forward.”

The pilgrimage was originally designed to start with a rally at St. Mary’s Historical Site on Paca Street, but the torrential rain led to alterations.

“Very often they’re not his plans,” the archbishop added. “He has to remind us of that now and then.”

To start the day, pilgrims – split into two groups – were sent to the basilica or to St. Alphonsus for a rocking concert by the Ike Ndolo Band, which hails from Phoenix, Ariz.

The pilgrimage brought repeat attendees, including many young adults.

“I love the yelling and the energy,” said Jessica Plazza, 23, of Resurrection of Our Lord in Laurel. “It’s not a church we see every Sunday. It’s a very different spiritual journey.”

After an hour and a half, the groups switched sites before walking to St. Casimir. The second basilica group carried the cross initially before being joined by the other group.

Pilgrims were forced to find respite from the lightning in a parking garage along Eastern Avenue. Many clutched rosaries and prayed as they waited out portions of the storm before continuing.

“I thought about going home, but I kept going because of the faith of others,” said Josh Bynum, a 12-year-old parishioner of St. John the Evangelist in Columbia.

Among the proudest adults at the pilgrimage was longtime organizer Mike Sullivan, 74, a parishioner of Shrine of the Sacred Heart in Mount Washington. He is believed to be the only attendee of every Youth and Young Adult Pilgrimage. Sullivan had double bypass surgery two months ago, but nothing was keeping him from his yearly passion. He walked eight miles throughout the day to make sure young people had a safe route.

“I think this program is the greatest thing in the world,” Sullivan said. “These kids are walking for Christ.”

Miller said discipleship is rarely easy and the youths and young adults were up to the challenge.

“We learned today there is no storm – weather, personal crisis, or whatever – that the young church, with the assistance of our Lord cannot overcome,” Miller said.

During his Palm Sunday homily, Archbishop O’Brien told the pilgrims that they are called to see Jesus in the unborn, abused children, those living in violent neighborhoods, migrant workers and the homeless.

“We are reminded this evening of our great opportunity to relieve the sufferings of Jesus Christ,” Archbishop O’Brien said. “When we no longer recognize the suffering Christ in the world, his passion and death continue.”

He called on the young Catholics to continue the good works of people fighting on behalf of the overlooked in society.

“Be aware in every situation in your life, for Christ Jesus is crying out,” he said, “for relief and compassion from you.”

For a video of the pilgrimage, visit CatholicReview.org/palmerblog.