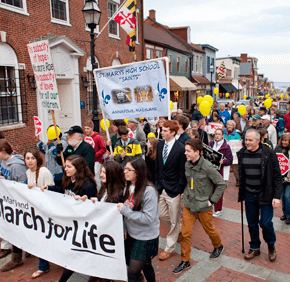 ANNAPOLIS – Organizers estimated 2,500 people participated in the 33rd annual Maryland March for Life March 12.  Ginny Dauses, campus minister at St Mary’s High School in Annapolis and one of the march’s coordinators, said this is one of the larger crowds the event has drawn.

Of those who filled the streets on a route between St. Mary’s Church and the statehouse, many were young people. That’s a sign of hope to pro-life veterans, including Cardinal Edwin F. O’Brien, who acknowledged the well-represented demographic at a Mass at St. Mary before the march.

Robbie Baranoski, 11, was among the younger marchers. A sixth-grader at St. Stephen School in Kingsville, he said he joined in the March to show others that the state shouldn’t allow abortions.

“People are concerned about this – even young people,” he said.

Theresa Suhar, a parishioner of St. Louis in Clarksville, brought her 8-year-old son and 5-year-old daughter to the march to teach them to stand up for their beliefs, she said. “I think it’s important to expose them to this young,” she said. “That’s our purpose as a mom, as a parent – help form their moral conscience.”

Like many parents attending the rally, it is Suhar’s hope that her children grow up to defend their beliefs against anti-life and anti-family causes, which have gained “dangerous momentum” in the past year, Cardinal O’Brien said in his homily.

He linked the recent Health and Human Services mandate that will require most Catholic institutions, including Catholic schools, hospitals and charities, to pay for contraception, abortifacients and sterilization, to Maryland’s new law permitting same-sex marriage, calling the defense of life, marriage and family life “all greatly connected.”

Cardinal O’Brien has long championed pro-life causes. While archbishop of Baltimore, he successfully fought a Baltimore City law requiring pro-life pregnancy centers to post signs stating that they did not provide or refer for abortions. A federal court overturned the law in 2011.

She quoted from the homily Cardinal O’Brien gave at his 2007 installation Mass, in which he said that “the right to life is the greatest civil rights issue of our time.”

“I will miss the battle here,” Cardinal O’Brien said at the end of the March 12 Mass, and he urged Catholics to continue to engage in grassroots work. “It has to come from the bottom up,” he said.

Pro-life leaders echoed the cardinal’s message at a post-march rally on Lawyers Mall. Following a prayer from Baltimore auxiliary Bishop J. Madden, march-goers heard from pro-life leaders who urged them to write and visit their lawmakers.

Speakers included rally emcee Tracey Tiernan from 95.1 Shine FM; Derek McCoy, president of the Maryland Family Council; Kelly Stauffer from Silent No More, who spoke about her own abortion at age 13; and Sean McKavitt, a St. Mary’s High School senior who said prayer inspires him to speak out in opposition to abortion.