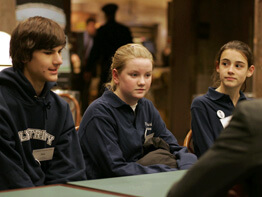 WASHINGTON – A wave of teenage – and preteen – lobbyists descended upon Washington Jan. 31 to make the legislative case for Catholic schools on a variety of issues, including educational choice.

They were Catholic school students themselves and were at the Capitol for the annual National Appreciation Day for Catholic Schools, part of the Jan. 28-Feb. 3 observance of Catholic Schools Week.

The students were from a dozen Catholic schools in the Washington and Baltimore archdioceses and the Diocese of Arlington, Va. They stuffed themselves into a Senate office building’s hearing room, about 100 seats too small to accommodate all of them, to get their talking points and marching orders from a panel of highly placed grown-ups in the Catholic education field.

“You’re going to be our advocates today before the House of Representatives and the Senate on four important issues,” said Father William Davis, an Oblate of St. Francis de Sales who is interim secretary for education for the U.S. bishops. Pointing to his fellow adults at the head table, he said members of Congress or their staffs “can look at me or some of these other people up here and say, ‘You’re supposed to be here. That’s your job.’”

But that was not the case, he added, for the students ready to fan out across the congressional office buildings surrounding the Capitol.

Vincent Guest, who lobbies on the bishops’ behalf on education issues, took note of his Catholic grade school and high school background in his native Philadelphia, saying: “What I am – the good parts – are the product of Catholic education.” He added, “In high school, my principal was Father Davis. … Look around at your teachers,” Guest said. “Someday they may be your boss.”

Father Daniel Coughlin, chaplain to the House of Representatives, said that despite arguments about issues, “everything on Capitol Hill here is pretty friendly.” He told the students to “be proud” and to “say you’re grateful, you’re grateful to be in Catholic schools.”

With a Catholic for the first time as House chaplain, a Catholic as speaker of the House (Rep. Nancy Pelosi of California), and a Catholic as leader of the House Republicans (Rep. John Boehner of Ohio), Father Coughlin said, “We need, as Catholics, to behave well. We need to model what is the best behavior.”

Father Coughlin told the story of Thomas Will, a Catholic student at a public school, who in 1859 “stood up and refused to give the Ten Commandments the way the Protestants said them. … This little guy was beaten up and was ridiculed sometimes.” Later, Will “didn’t want to read from the Protestant Bible. He wanted to read from his Catholic Bible. That got people mad and he was beaten up some more.”

That turned out, Father Coughlin said, to be the start of the Catholic school system in the United States: “A few weeks later, he had 300 other kids agreeing with him.”

The issues the students were to take to Congress dealt with: