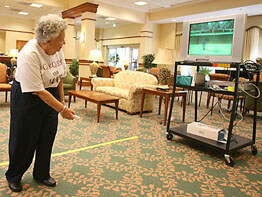 More than a handful of people gathered around the television set at Oak Crest Village Retirement Community May 1, waiting for their chance to play the new Nintendo Wii, which was recently donated to the Parkville retirement community. The small crowd laughed and applauded as a man attempted to play golf on the new system.

The Nintendo Wii, which uses a wireless controller to translate players’ motions onto the screen, is designed to make gaming accessible to people of all ages and abilities, said Jane Powell, public relations director for Oak Crest. A large plasma T.V. is being installed in a designated room so the residents can play whenever they would like. The large screen will also aid those with poor eyesight.

Three juniors from Towson Catholic High School, Rachel Silver, Angela Kim and Jenny Jang will be assisting the residents throughout the end of May as they learn to play Wii. They have been teaching the people of Oak Crest how to hold the controller and move their body just right so the ball goes in the hole, down the alley or up center field. The Wii comes with four sport games including golf, bowling, tennis and baseball.

“They were very helpful,” said Carolyn Sibley, 83. “They would encourage everyone to try the game so no one was left out.”

Ms. Sibley, who once played golf when she lived in Florida, said she needs to keep practicing with the game but every time she plays she learns something new. She said she really enjoys playing tennis and bowling because the motions are the same as if you were really playing.

“I like the game better then playing the real sport because golf is expensive and at 83, I don’t drive any more,” said Ms. Sibley who is excited for her grandsons to come and play the game with her.

Angela and Rachel both said they don’t own a Nintendo Wii but their friends do and the games are pretty easy to learn. Both girls said they really enjoy video games and they wanted to share that joy with other people.

“The game allows them to do things they might not be able to do anymore,” said Rachel. While Angela added, “They were easygoing and it was easy to teach them. They caught on fast.”

Louise Ross didn’t play many sports when she was a child, but she loves playing them on Wii. She has gotten very good at the bowling game and said it is her favorite because she has always wanted to play but the ball is just too heavy for her.

“I think this was made for seniors,” she said with a laugh. “I do intend to be down here renting it out.”