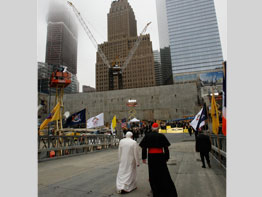 Whether the pope was addressing international or religious leaders, youths or those Catholics who filled baseball stadiums in Washington and New York, he continually reiterated the trip’s theme, “Christ Our Hope,” and earnestly spoke of a “new springtime” for the church in America.

The pontiff, in his first visit to the United States as pope, celebrated Mass at the ballparks in both cities and spoke at the White House, the General Assembly of the United Nations and at churches in Washington and New York. He also departed from his planned itinerary for a private meeting with victims of the clergy sex abuse crisis.

He often spoke of the “genuinely religious spirit” of the American people and praised the vitality of parish life and church movements. But he also encouraged U.S. Catholics to take their faith experience to a deeper level by evangelizing with renewed zeal and rejecting secularism.

Instead of criticizing U.S. Catholics as some commentators had predicted, the pope gently urged them to be unified and to be a beacon of hope in the modern world.

The visit had been highly anticipated since it was announced in November 2007. Many wondered how the scholarly pontiff would compare with the crowd-pleasing Pope John Paul II. But in all the public venues the cheering crowds dispelled the notions of Americans not warming up to Pope John Paul’s successor.

There was pre-visit speculation about whether the pope would address the clergy abuse scandal – which he did several times – and what he would say to Catholic college presidents – he offered them words of encouragement.

Right from the start – aboard the papal flight to the U.S. – Pope Benedict addressed the clergy abuse crisis that had scarred the U.S. church, saying he was “deeply ashamed” by it. Throughout the U.S. visit he condemned the abuse scandal and spoke of the urgent need for healing.

During a Mass at St. Patrick’s Cathedral in New York for priests and religious, the pope urged the congregation to move past divisions and scandal toward a “new sense of unity and purpose.”

In other gatherings he sounded warnings on the dangers of secularism and the misuse of freedom.

During an April 17 Mass at Nationals Park, Washington’s baseball stadium, he told 45,000 people that American society is at a moral crossroads. Three days later at a Mass at New York’s Yankee Stadium, the pope urged more than 57,000 Catholics “to use wisely the blessings of freedom in order to build a future of hope for coming generations.”

Pope Benedict also made a special appeal to young people at the Yankee Stadium Mass, urging them to “step forward and take up the responsibility which your faith in Christ sets before you.” He offered a similar challenge to about 25,000 youths the previous day during a rally at St. Joseph’s Seminary in Yonkers, N.Y.

In Washington, the pope urged 400 Catholic college presidents and diocesan education representatives at The Catholic University of America to lead students to deeper faith. He also told about 200 representatives of Islam, Jainism, Buddhism, Hinduism and Judaism at the Pope John Paul II Cultural Center “to persevere in their collaboration” to serve society and enrich public life.

The pope began his U.S. visit by meeting privately with President George W. Bush after he was greeted by thousands of well-wishers during a public welcoming ceremony on the White House lawn.

He spoke to about 300 U.S. bishops at the Basilica of the National Shrine of the Immaculate Conception encouraging them to continue their work to restore trust in the church and its ministers.

In New York, he told the U.N. General Assembly that fundamental human rights “cannot be applied piecemeal” and cannot be denied or diminished because of “different cultural, political, social and even religious outlooks.”

One of his most somber visits was at ground zero, where the pope knelt alone and offered a silent prayer. He also read a prayer aloud with a small group at his side representing survivors, the family members of the dead and representatives of the New York Port Authority, police and fire departments.

At an ecumenical prayer service in New York he expressed concern that Christianity could slip into “fragmentation and a retreat into individualism.” Pope Benedict met separately with the Jewish participants in the interreligious meeting. He also visited a New York synagogue.

The pope had two occasions of his own to mark while in the United States: his 81st birthday and the third anniversary of his election as pope.

After his departure, many U.S. Catholics said they felt a deeper connection with their spiritual leader and that the effects of the visit would last beyond the six-day trip as they planned to read and reread the texts of his speeches.

For many, what stood out the most was not the huge crowds at papal events but his private meeting at the apostolic nunciature in Washington with five victims of clergy sexual abuse.

One observer summed it up by saying the pope did “exactly what American Catholics needed and wanted to see” from the person who is the highest authority in the church.