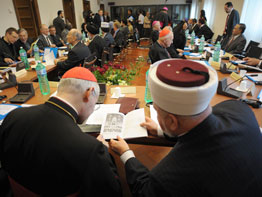 VATICAN CITY – Pope Benedict XVI will look back on 2008 as an important year for interreligious dialogue, with the inauguration of a major Catholic-Muslim forum, notable meetings with Jews in the United States, and the opening of ecology as a new terrain for interfaith cooperation.

At the same time, discrimination and violence against minority Christian communities in Asia and the Middle East clouded the interfaith horizon and pushed human rights to the top of the Vatican’s dialogue agenda.

The initial meeting at the Vatican of the Catholic-Muslim Forum in November was a milestone in relations between the two faiths, and represented a remarkable turnaround after a low point in dialogue two years earlier.

The theme of the encounter was love of God and neighbor, and the Vatican representatives made sure to highlight respect for human rights – including the rights of minority faith communities – as an essential area of cooperation.

Pope Benedict addressed the 56 forum participants and emphasized the need for believers to show each other mutual respect and guarantee the right to freely profess and practice their faith.

In December, another major Catholic-Muslim session took place at the Vatican, this one involving representatives of the World Islamic Call Society. The discussion theme of the three-day meeting was the responsibility of religious leaders in times of crisis.

In April, an Iranian Muslim delegation arrived for talks at the Vatican, and participants said in a final statement that “faith and reason are intrinsically nonviolent.” That was a key point raised by Pope Benedict in a 2006 speech in Regensburg, Germany, which prompted Muslim protests because it appeared to challenge Islam on the issue of violence.

The pope was at the center of another interfaith episode when, at a Holy Saturday liturgy in St. Peter’s Basilica, he baptized a Muslim-born journalist, Magdi Allam. The Vatican downplayed its significance, but Allam did not; he issued an open letter that described Islam as inherently linked to terrorism and critiqued the Vatican’s own policy of dialogue with Muslims.

Worsening violence and intimidation against Iraqi Christians by Muslim extremists prompted a number of papal appeals during the year, and the pope also condemned the violence against minority Christians by Hindu gangs in India. The Vatican’s annual message to Hindus emphasized the Hindu tradition of nonviolence and warned that religion today is sometimes manipulated in support of violent acts.

Visiting the United States in April, the pope met with about 200 representatives of Islam, Jainism, Buddhism, Hinduism and Judaism at the Pope John Paul II Cultural Center in Washington. Five young people presented the pontiff with symbols representing peace from various faiths.

The pope told the gathering that, in their attempt to discover common ground, religious leaders perhaps “have shied away from the responsibility to discuss our differences with calmness and clarity.” Interfaith dialogue, he said, should not stop at identifying a common set of values, but go on to probe their “ultimate foundation,” the truth.

Catholic-Jewish relations came under strain early in 2008 when the Vatican published Pope Benedict’s revised prayer for the Jews for use in Tridentine-rite Good Friday liturgies. The new prayer removed old language referring to the “blindness” of the Jews, but it prays that Jews will recognize Jesus, the savior, and that “all Israel may be saved.”

The Vatican sought to reassure Jews that the prayer, used in very limited circumstances, did not represent a step back from the teachings of the Second Vatican Council. Church officials said the new wording referred to salvation at the end of time and was not a call for a missionary effort among the Jews.

While in the United States, the pope added two significant events with Jewish audiences. In Washington, he met separately with Jewish representatives and told them Catholics and Jews share a special bond, and he reaffirmed the church’s 40-year commitment to dialogue. In New York, he attended a prayer service at a synagogue and encouraged the building of “bridges of friendship” between religions; it was only the third time a modern pope had visited a Jewish place of worship.

Later in the year, the long-standing controversy over the sainthood cause of Pope Pius XII surfaced once again. Celebrating a memorial Mass Oct. 9 to mark the 50th anniversary of Pope Pius’ death, Pope Benedict defended the late pope’s actions during World War II, saying he had acted “secretly and silently” to help save the greatest possible number of Jews.

At the same time, the Vatican said Pope Benedict had decided to delay his decision on Pope Pius’ sainthood cause during a “period of reflection.” A Vatican spokesman later asked both supporters and opponents of the cause to stop pressuring the pope on the issue.

On a more personal note, Pope Benedict said in November that he still felt sorrow when he recalled the night in 1938 when Nazi mobs rampaged against Jews in his native Germany. The event became known as Kristallnacht, German for Night of the Broken Glass.

“I still feel pain for what happened in that tragic circumstance, whose memory must serve to ensure that similar horrors are never repeated again and that we commit ourselves, at every level, to fighting anti-Semitism and discrimination, especially by educating the younger generations in respect and mutual acceptance,” the pope said.

Throughout the year, Pope Benedict and other Vatican officials spoke about protecting the environment as a cause where members of various faiths could find common ground. In its annual message to the world’s Buddhists in April, the Vatican said Christians and Buddhists should work together to promote respect for the earth and a safe, clean environment.

It said people need to understand that environmental protection will succeed when people understand the relationship between “the divine Creator” and the created world.