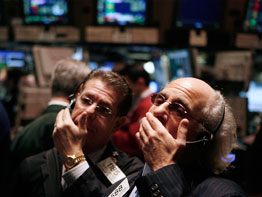 WASHINGTON – History likely will frame 2008 as the year America overcame lingering questions about racism as the country elected its first African-American president in Barack Obama.

But even such a historic election could be overshadowed by the deepening concern about just how far the U.S. economy would sink into recession in the worst economic slump since the Great Depression.

The majority of electoral analysts agreed people voted their pocketbooks Nov. 4, thinking Obama offered them a better chance to save their homes from foreclosure, create jobs and spur an economic turnaround in a shorter period of time than Republican John McCain.

However, as the year drew to a close, the consensus among financial analysts, economists and government policymakers was that any recovery would be more than a year away.

President-elect Obama himself acknowledged things would get worse before they got better.

Recent economic projections bore that out:

– The financial firm Goldman Sachs, after adjusting its projections for unemployment twice since October, predicted the figure would reach at least 9 percent in 2009. Unemployment stood at 6.7 percent in November, according to the Bureau of Labor Statistics.

– The Washington-based Center on Budget and Policy Priorities expected that such a high rate of unemployment could translate into as many as 10.3 million people falling into poverty. That figure included up to 6.3 million people lapsing into deep poverty, which includes those whose income is below half of the poverty line, which was about $11,500 for a family of four in 2007.

– The gross domestic product – the value of services and goods produced – was expected to fall for another year. The consensus on Wall Street and among Washington policymakers was that it would be well into 2010 before even a minimal turnaround could be expected.

– The Big Three automakers – General Motors, Chrysler and Ford – faced an even bleaker future after Senate Republicans objected to a $14 billion loan package that earlier was approved by the House of Representatives, though the White House was trying to work out a rescue plan to help the companies in the short term as they retooled their business models.

– Home foreclosures had declined slightly by early December but remained at near-record levels. Housing values continued to decline and prices were expected to tumble another 10 percent to 15 percent before the market began to recover.

The bad forecasts came despite frenetic federal efforts to bail out U.S. banks, which faced shortfalls in revenues thanks largely to defaults on mortgage payments by homeowners deep in debt. After a week of intense negotiations, the Bush administration and Congress agreed to a $700 billion infusion of funds for banks.

Such dire economic news got the attention of the U.S. Conference of Catholic Bishops, which at its annual November meeting in Baltimore agreed to a statement issued by Cardinal Francis E. George of Chicago, conference president. The statement expressed solidarity with those who lost jobs, had their homes foreclosed on and saw retirement savings threatened. “We are all in this together,” the statement said.

Citing the human and moral consequences of the crisis, the statement said the church would continue to “reach out to those in need, stand with those who are hurt and work for policies that bring greater compassion, accountability and justice to economic life.”

In separate statements to parishioners in their archdioceses, Cardinals Roger M. Mahony of Los Angeles and Adam J. Maida of Detroit urged people to place their trust in God and seek consolation in Christ even as their concerns deepened.

The cardinals also offered support and prayers for officials working to right the economy in the hope their decisions would be fair to all.

Pope Benedict XVI spoke about the world economy several times after the near collapse of financial systems in September. He reserved his strongest comments for the Jan. 1 celebration of the World Day of Peace.

In his message, titled “Fighting Poverty to Build Peace” and released Dec. 11, the pope said global governance and a new ethical approach were needed for the world’s financial markets and international commerce so investments and development would contribute to the common good and to world peace.

Policies and norms must be based on a common code of ethics and actions must be guided by the principles of “fraternity and responsibility,” he said.

As the pope released his document, Catholic Charities USA was working to address the growing need for food, housing, financial assistance and health care amid cuts in government funds that local agencies were experiencing. A fall survey of local Catholic Charities agencies found more middle-class people turning to the diocesan agencies for basic needs in addition to a growing number of the poor.

During a Dec. 11 teleconference, Catholic Charities officials called upon the federal government to boost support for lower income people “on the back street” the same way they supported financial firms on Wall Street and talked about assistance for the middle class on Main Street.

“This is a great opportunity in the economic recovery so that the people who were left out in the past will be included in the future recovery package,” Candy Hill, senior vice president for social policy and government affairs at Catholic Charities USA, told dozens of the agency’s diocesan affiliates. “We’re trying to make sure this is an inclusive package.”