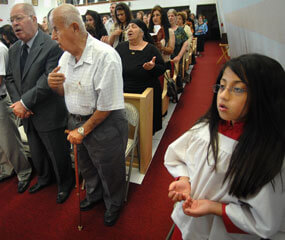 WASHINGTON –- Violence continued to feed the flow of Christians leaving the Middle East, with church leaders generally agreeing that only peace would solve the problem.

A shocking coda to the violent year was the attack on a Syrian Catholic church in the Iraqi capital of Baghdad Oct. 31. As police moved in to rescue Catholics held hostage by Islamic militants with ties to al-Qaida, 58 people, including two priests, were killed.

At a Dec. 10 memorial Mass in Baghdad for the victims, Syrian Catholic Patriarch Ignatius Joseph III Younan referred to the cover-up of “the terror targeting Iraqi Christians.”

“It is the responsibility of the Iraqi government to carry out proper and thorough investigations to uncover the terrorist groups who did plan and finance the carnage, of whatever religious or political allegiance they may be, and to bring them publicly to justice,” he said in his homily.

Some reports indicated that more than half of Iraq’s Christian community, estimated to number 800,000 to 1.4 million before the American-led invasion in 2003, have already left the country. The October incident led to a new wave of flight.

Iraqi officials pledged to protect the Christians, but their pledges were met with skepticism. The British branch of Aid to the Church in Need reported that Iraqi officials were erecting concrete barriers around Christian churches, and police were scanning people as they entered the churches for services.

A December report from a Christian committee for Iraqi refugees in Syria gave the following report about Christians remaining in Iraq:

“Their conditions are no longer bearable. The people are living behind locked doors, they are compelled to take long leaves of absence from work, in Mosul and other cities, as a result of the dangers they face at work.

“It is as if they are in prison: without work, without study, without church meetings. Fear rules over all situations and in all places,” it added.

A study issued in November by the Jerusalem-based Catholic Aid Coordination Committee reported that Palestinian Christians said they would rather stay in their homeland, if there were enough opportunities for them. Palestinian emigrant communities have long been established in the United States and many Latin American nations, and Iraq’s Chaldean Catholics and Lebanon’s Maronite Catholics have strong enclaves in some major U.S. cities.

Lebanon has the largest estimated percentage of Catholics in the Middle East. Virtually everywhere else, their percentages are in the single digits, and dropping.

But the dwindling number of Christians in Lebanon has some fearing that if a new census were taken – none has been conducted in nearly 80 years – the unique power-sharing arrangement with Muslims in that country would have to be redrawn.

The flow of Catholics from the Middle East was just one of the issued addressed at the Vatican during a two-week Synod of Bishops for the Middle East.

Synod members asked Catholic emigrants from Middle Eastern countries to consider returning home and to think twice before selling their property in their homelands. One synod proposition said, “We exhort our faithful and our church communities not to give in to the temptation to sell off their real estate,” over reports that some Christian areas had turned totally Muslim as a result of land sales.

“We must never resign ourselves to the absence of peace,” Pope Benedict XVI said Oct. 24 during his homily at the synod’s closing Mass. “Peace is possible. Peace is urgent.”

In the synod’s final document, the bishops said religion should never be used to perpetrate injustices.

“On the contrary, recourse to religion must lead every person to see the face of God in others,” the bishops said. This was seen by some participating bishops as an allusion to Israel using the Old Testament to justify its claim to its territory.

Israeli leaders took umbrage at U.S. Melkite Bishop Cyrille S. Bustros of Newton, Mass., when he told reporters during the synod that Israel could no longer consider itself a “chosen people” or Israel as “the Promised Land” because Jesus’ message showed that God loved and chose all people to be his own.

Other synod propositions asked the pope to study ways to expand the jurisdiction of Eastern Catholic patriarchs and major archbishops to allow them greater power in providing for their faithful who live outside the traditional territory of their churches and to consider dropping restrictions on ordaining married men to the priesthood outside the traditional homeland of the particular church.

The synod advocated continued dialogue with Jews and Muslims in the region, although two bishops at the synod publicly doubted the value of Catholic-Muslim dialogue.

Near the start of the synod, Iranian President Mahmoud Ahmadinejad told Pope Benedict that he would like to work more closely with the Vatican in an effort to stop religious intolerance and the breakup of families. Ahmadinejad also appealed to world religions to cooperate in the fight against secularism and materialism.

While the Vatican confirmed receipt of the letter, other nations’ leaders remained suspicious of Iran’s intentions with its nuclear program.

A U.S. diplomatic cable that was part of the huge WikiLeaks cache of memos in late November noted how the Vatican tried to position itself as an intermediary with Iran in case of an international crisis, adding that in 2007 the Vatican had helped secure the release of British sailors detained in Iranian waters.

Also this year, Tariq Aziz, former Iraqi secretary of state and the only Christian in former Iraqi leader Saddam Hussein’s inner circle, was sentenced to death Oct. 26 for his role in “persecution of Islamic parties” following Iraq’s defeat in the 1991 Persian Gulf War. Aziz, who has been in custody since 2003, has long suggested he would die in prison.