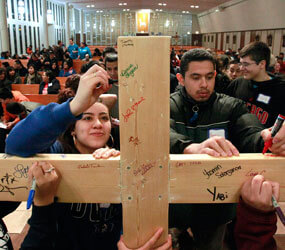 VATICAN CITY – With more than 1 million Catholic youths expected to converge on Madrid for World Youth Day in August, organizers are busy making final preparations, including the choice of new songs for the crowds to sing in addition to the much-criticized official hymn.

“The hymn is my nightmare,” Yago de la Cierva, executive director of WYD 2011, told reporters at the Vatican March 15. He was responding to a Spanish journalist, who asked how they could have chosen what she described as an awful song for the theme hymn.

De la Cierva said, “It’s very beautiful for the type of music it is, but maybe we made a mistake” in choosing the genre. Once it became clear that the song was not popular, especially in Spain, WYD launched an international contest for other song suggestions, he said.

De la Cierva said more than 80 alternative songs had been uploaded to the contest site – http://madridmeencanta.org – and Rafael Rubio, WYD director of communications, said the site had been visited more than 600,000 times by March 15.

World Youth Day will be celebrated in Madrid Aug. 16-21. With the event five months away, organizers said more than 290,000 people already had enrolled. De la Cierva also said that in previous World Youth Days, the number of people signed up to participate officially in the full program represented only about 25 percent of the total number of people who came for the main events with the pope, so WYD Madrid should draw well over 1 million people.

Briefing reporters about the preparations, he said the Pontifical Council for the Laity had asked that the event be identifiably Spanish, “not something like a Starbucks, which is the same wherever you go.”

“This will be a Spanish fiesta,” he said.

In addition, De la Cierva said, the traditional bond between the faith and art will be highlighted, especially during the Stations of the Cross.

And, “there will be many events late at night. We Spaniards eat dinner at about 10 (p.m.) and we don’t go to bed before midnight,” he said. “Obviously, the catechesis in the morning will begin later” than was usual at World Youth Day in other cities.

WYD 2011 also is attempting to reflect the Spanish reality in its budget, he said. Because of the economic crisis in Spain, event organizers are committed to spending 20 percent less than was spent for the 2008 youth event in Sydney.

Organizers have announced a series of measures to reduce the gathering’s impact on the environment. They are encouraging pilgrims to walk, ride bikes or take public transportation to events and will provide electricity-generating bicycles at selected events so participants can pedal to recharge their mobile phones, laptops and other electronic devices.