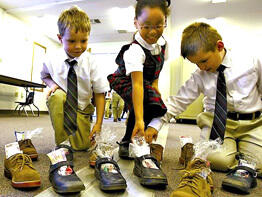 In the Hispanic culture, the Epiphany is almost as important as Christmas. It is the day when the three kings traveled far from home to visit a newborn baby, in the City of Bethlehem.

For the past four years, Woodmont Academy, Cooksville, Spanish teacher Patricia Stack has been helping to educate students from pre-kindergarten to third grade about this joyous event as they learn about the Hispanic culture.

This year she organized holiday festivities for her 150 students from Jan. 4-5.

Ms. Stack has students place their shoes (labeled with their nametag so no one takes home the wrong footwear) in a separate classroom and wait for the three kings to fill them with candy. While the children are waiting Ms. Stack reads them a story about “Tres Reyes” (three kings) who searched for the savior to bring him gifts of gold, frankincense and myrrh. The students color pictures, eat cupcakes and pretend to sleep while they wait for the three kings to finish filling everyone’s shoes.

“My goal in Spanish is not only to have them learn the language but the culture as well,” Ms. Stack said. “The culture is so rich and the religion is an important part of their lives.”

Ms. Stack also selects one student to be the “baker” for their class. That student is given a baby Jesus to stick into one of the cupcakes and whoever picks the cupcake with the baby Jesus hidden in it, wins a prize.

Last year third-grader Kaylee Williams was chosen as the baker and helped her mother whip up the treats. Kaylee’s mother, Patricia Williams, wanted to make the cupcakes festive, so after placing the baby Jesus in one of the cupcakes she decorated each cake with red or green icing. When it came time for the children to eat their cupcakes last year, as luck would have it, Kaylee had found the baby Jesus in her cake.

“My favorite part is finding out who has baby Jesus,” said Kaylee.

“They learn to appreciate the holiday and traditions of the Epiphany,” said Ms. Stack.