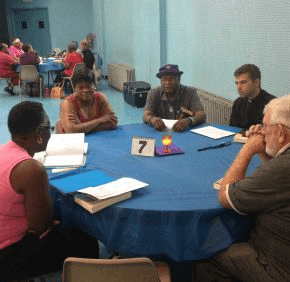 By Kit Cross
Special to the Review
EMMITSBURG – More than 300 women from along the Eastern seaboard, and some from overseas, heard from Archbishop William E. Lori and others at the sixth annual Maryland Catholic Women’s Conference retreat at Mount St. Mary’s University.
The theme of the Oct. 7-9 gathering was “Witness of Mercy.”
Archbishop Lori celebrated Oct. 8 Mass at the Chapel of the Immaculate Conception. In reflecting on the Jubilee Year of Mercy, which ends Nov. 20, he noted that it will not be followed by a “year of severity.”
“(Mercy is) not just something we do for a year,” the archbishop said later in his homily. “It really affects how we live our faith going forward.”
The archbishop added that we are each called by our vocation to be agents of God’s mercy. For the many mothers in attendance, that means teaching mercy in the home.

Archbishop William E. Lori discusses God’s mercy during his Oct. 8 homily  Mass in the Immaculate Conception chapel on the campus of Mount St. Mary’s University as part of the Maryland Catholic Women’s Conference. (Kit Cross/Special to the Review)

“Family should be a sanctuary of mercy,” Archbishop Lori said. “It should be where young people open their hearts to the Lord’s mercy, where they learn mutual forgiveness and where they learn to reach out beyond their own wants and needs.”
That need, to strengthen families and especially mothers, was the motivation for the annual conference.
“Mothers are the foundation of the family,” said Jeanne Link, founder and chairwoman of the Maryland Catholic Women’s Conference (MCWC). “Moms are the ones who are really teaching kids on a daily basis their faith.”
After Mass Oct. 8, retreat participants heard a keynote address by Father Chris Alar, of the Shrine of Mercy in Stockbridge, Mass. He spoke of suffering and St. Faustina Kowalska, through whom Christ worked to bring about a dedication to his Divine Mercy.
Father Alar said that at some point everyone will experience suffering, which can be better understood by looking to the saints.
“The saints tell us that suffering is valuable,” Father Alar said. “They say it has inestimable redemptive worth, and nothing else equals it.”
He reminded the women in attendance of how Christ worked through St. Faustina’s suffering: “Jesus told St. Faustina … you will save more souls through prayer and suffering than will any missionary through his teachings and sermons.”
While the conference began as a way to strengthen mothers in their faith, there were many single and religious women in attendance.
Link, the MCWC chairwoman, pointed to several in their 20s serving as committee members. They’ve built an online presence through social media, which helps reach women who may be discerning a religious vocation.
Pauline Sister Tracey Matthia Dugas, based in New Orleans, attested to the power of social media. In addition to being the emcee, she was the other keynote speaker.
“We believe that if St. Paul were alive today (he) would use the most modern and effective means to relate to people and communicate the message of Jesus,” said Sister Tracy, who specializes in media evangelization.
Her order, the Daughters of St. Paul, intends to have a presence at Mount St. Mary’s next year, as Pauline Sister Helena Burns, a movie writer, director and producer, is on deck for the 2017 MCWC.
For more information, visit  marylandcatholicwomen.com Also see:

Court rules in favor of Archdiocese of Baltimore on free-speech case When the choice is Clinton or Trump, what’s a Catholic to do?