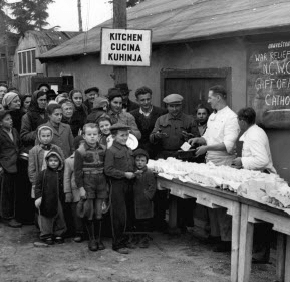 By Maria Wiering
mwiering@CatholicReview.org
Twitter: @ReviewWiering
It was 1943. The United States was at war against the Axis powers, and the U.S. bishops responded by establishing an international humanitarian agency, War Relief Services.
The fighting was in Europe and the Pacific, but the agency’s first mission was to Colonia Santa Rosa, Mexico – a refugee camp 250 miles north of Mexico City – where it cared for some 1,400 Polish refugees, survivors of an arduous journey from Siberian concentration camps through the Middle East and across the Indian and Pacific oceans.
Renamed Catholic Relief Services in 1955, the Baltimore-based organization continues to provide assistance wherever needed, with a current presence in more than 100 countries.
For Sean Callahan, CRS’s chief operating officer, the 70-year milestone is about the agency’s future, as much as its past.
In the 25 years he has been with the agency, he has witnessed dynamic changes – including its 2011 transition in leadership from President and CEO Ken Hackett, who retired after 39 years with the agency, to Carolyn Woo, who was recently listed among the planet’s “500 most powerful individuals” by Foreign Policy Magazine.
The agency adapts its tools and approaches to meet new challenges, but CRS has always “saved lives, protected lives and helped transform lives,” Callahan said.
“In everything we do, we want to maintain that human dignity,” he said.
In its first decade, the agency sent food, clothing and other supplies to American and Allied prisoners in German prison camps, money to China, and clothes to war victims in Korea. Its employees were soon working around the world, including in France, India and, in 1954, South Vietnam.
In the decades since, it has provided immediate disaster relief assistance and spearheaded long-term development initiatives to improve access to food, water, health care and housing in underdeveloped nations, in partnership with other humanitarian organizations, governments and local, national and global businesses. Callahan expects those partnerships to deepen and expand in the future, he said.
The 1994 Rwandan genocide was pivotal for the agency, said John Rivera, CRS’ director of communications. An estimated 800,000 people died in tribal violence, including CRS employees, their families and friends.
The organization had been working in the African country since the 1960s and was aware of the ethnic conflict between the Hutus and Tutsis, but didn’t want to become involved in a political struggle, Rivera said. The civil war forced CRS to examine its approach, and the agency embraced Catholic social teaching as a guide.
“We had been a marquee relief and development agency – we were one of the best, most professional relief and development agencies in the world … but I think we had lost a bit of our sense of mission in that time,” he said.
Now the agency works through a “justice lens,” Rivera said, by which it considers its work’s effect on community dynamics where it serves.
“We realize that if we don’t address those, the work we do is less sustainable,” he said. “We try to help establish right relationships in the places where we work.”
CRS sets itself apart from other humanitarian agencies by going where others don’t go – literally, as its programs aren’t limited to areas with easy access to roads – and that it views its work as a mission, not a job, Callahan said.
More than 80 percent of CRS’ staff is from the countries where the agency works, he added. The organization emphasizes helping people they serve assume leadership for their region’s development.
“We really are in service to the people who participate in our programs,” he said.