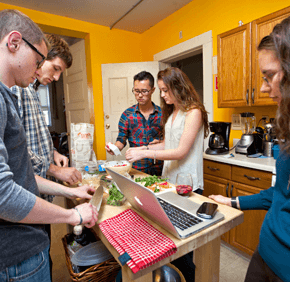 By Maria Wiering
mwiering@CatholicReview.org
Five young adults. Four work sites. One house. Two cars. Twelve months.
Each August, a group of college graduates begin Project SERVE, a Catholic Charities volunteer program for young adults. They commit to service, communal living and simplicity, living off a $264 per month stipend as they work with Catholic Charities programs.
Together, they wrestle with questions of injustice, suffering, human frailty, and personal prejudices.
They also celebrate successes, such as meaningfully connecting with a child with behavioral problems, helping an immigrant reduce a medical bill he can’t afford to pay, and moving a formerly homeless family into permanent housing.
“It’s been a really hard year for me,” said participant Marta Brohawn, 22, a graduate of Mount St. Mary’s University in Emmitsburg. She handles case work at Sarah’s House, a program in Fort Meade for people who are homeless in Anne Arundel County.
She regularly encounters people in “really hard circumstances,” she said, including mental illness and traumatic pasts. She’s had a role in connecting people with the right medication, a steady job and transitional housing.
Raised in Columbia, Md., Brohawn didn’t see much homelessness growing up, but her work with Catholic Charities opened her eyes, she said. Now she aspires to a career in social work.
“I definitely know this is what I want to do,” she said.
Project SERVE’s other participants also say the program has shaped the path their lives will take, even if they decide not to work in social services. Several began the program with good backgrounds for their volunteer work.
Matt Cheng, 22, volunteered at Our Daily Bread while a student at the University of Baltimore, and, through Project SERVE, is now its volunteer coordinator with a deep affection for the Baltimore hot-meal program’s clients.
Eric Seymour, 24, lived in Ecuador and speaks Spanish at Esperanza Center in Fells Point to help the immigrants it serves connect with health care and English classes.
Maria Williams, 27, holds a masters degree in counseling from Loyola University Maryland in Baltimore and works with fellow Project SERVE volunteer Arthur Krieger, 24, at St. Vincent’s Villa in Timonium, teaching children with behavioral problems.
Every day of their work is rewarding, even when stressful, said Williams, a parishioner of Our Lady of Peace at Fort Meade. She is now interested in clinical psychology to focus on diagnostics and testing.
Krieger hopes to continue to work with youth in treatment after his group’s commitment to Project SERVE ends in July, even while pursuing graduate studies in philosophy. He said his experience “deepened his faith in humanity.”
In its 16th year, Project SERVE – an acronym for Service and Education through Residential Volunteer Experience – is part of the Catholic Volunteer Network and modeled after the Jesuit Volunteer Corps. It is also affiliated with AmeriCorps.
Applicants must be age 21 to 30; a college graduate; a U.S. citizen, U.S. national or lawful permanent resident; pass a background check and commit to a year of service.
They also need to be open to intentional community, sustainability and simplicity and engaging in social justice – and a sense of humor, said Allison Stone, who oversees the program at Catholic Charities.
Participants’ energy and enthusiasm is a boost for both Catholic Charities’ staff and clients, she said.
Participants share a community dinner weekly and attend three retreats. They also spend much of their free time together.
This group, Seymour said, quickly became friends. They continue to learn from one another and support each other.
Sharing a homemade meal around their dining room table in the Baltimore their Midtown rowhouse, they bantered easily, but also complimented each other’s strengths and contributions.
“You learn and grow so much,” Browhan said, “even more than I could ever know.”
Related articles:
Baltimore Catholic League players team up with Catholic Charities
Danish students experience American outreach at Esperanza Center
As politicians take sides, minimum wage winners and losers uncertain
Also see:
Cancer-free Baltimore priest humbled by support of parishioners
Three questions with Lucy Colletti, a supporter of the troops
PrevNext