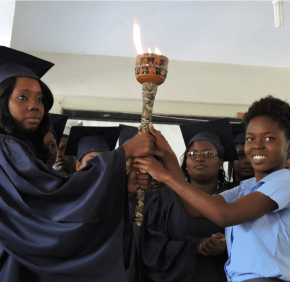 Fourteen years after kindergartners were among the students in a new school he helped open in his Haiti hometown, Deacon Rodrigue Mortel watched some of those now-young adults earn the equivalent of an American high school diploma, a journey that included the assistance of the Archdiocese of Baltimore

The director of the archdiocesan Missions Office and a local delegation were among the honored guests July 12 in St. Marc, Haiti, for the first graduation from the James M. Stine College.

Forty-one young men and women earned degrees that will allow them to apply for law school or medical school in Haiti. Four of those were in the first kindergarten class in 2001 at The Good Samaritans School, within walking distance in this coastal town a 90-minute drive north of Port-au-Prince.

Both the elementary school and college are Catholic institutions, projects spearheaded by Deacon Mortel in a remote area of the most impoverished and illiterate nation in the Western Hemisphere.

“It was so rewarding to see this accomplishment for some kids that you took from the poorest areas surrounding the city (of St. Marc),” Deacon Mortel said. “As they take the next step, I challenged them to cultivate what I call ‘HiPad.’ “

To that end, he used a play on words, adding a letter to iPad to come up with honesty, integrity, productivity, assiduity and determination.

Named for a Philadelphia benefactor, the James M. Stine College was built to accommodate those who had completed elementary and middle school level work at The Good Samaritans School.

The college opened in 2011 and was dedicated in January 2012 by Cardinal Edwin F. O’Brien, then an archbishop and the apostolic administrator of the archdiocese. The building of Stine College had included the financial support of the archdiocese.

The college enrolled 402 students during the 2014-15 school year. Deacon Mortel said that some of its recent graduates will pursue computer science, others medicine.

“The problem is, seats at the universities in Port-au-Prince are limited, compared to the number of applicants,” he said. “We are beginning to explore various avenues, to try to get at least some of the graduates into this country to study.”

Guests at the July 12 graduation included 15 youths doing outreach under the auspices of the Baltimore Haiti Project, which is run by Deacon Mortel, and Timothy Janiszewski, pastoral associate for youth ministry and evangelization at Our Lady of the Chesapeake in Lake Shore.

The asphalt basketball court at Stine College is named for Archbishop Spalding High School in Severn, which, as in summers past, sent students on a mission trip to St. Marc. Calvert Hall College High School in Towson sent a similar contingent there during the 2014-15 school year.

For more information about the schools in St. Marc, email rmortel@archbalt.org or visit mortelfoundation.org.