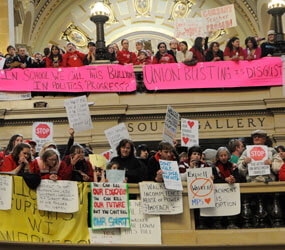 WASHINGTON – The chairman of the U.S. bishops’ Committee on Domestic Justice and Human Development gave his support Feb. 24 to views on the rights of workers caught in the midst of Wisconsin’s budget battle earlier articulated by Milwaukee Archbishop Jerome E. Listecki on behalf of the state’s bishops.

“I write to express support for and solidarity with your clear statement,” said Bishop Stephen E. Blaire of Stockton, Calif., the committee chairman, in a letter to Archbishop Listecki.

“You and our brother bishops in Wisconsin are offering a timely reminder of what the church teaches on the rights and duties of workers, including the right to form and belong to unions and other associations, and the obligation to address difficult problems with respect for the rights and needs of all,” Bishop Blaire said.

The Catholic Labor Network released a letter it sent to Wisconsin lawmakers echoing the same viewpoint. And in a column for his diocesan newspaper, Bishop Robert C. Morlino of Madison, Wis., called for civility in the debate, urging common ground be reached on what is fair for both sides.

Large daily protests have inundated Madison, Wisconsin’s capital city, and its government and legislative offices since a budget-balancing proposal was issued earlier in February by new Gov. Scott Walker.

The bill would force state employees to pay half of their pension costs and 12.6 percent of their health care coverage, moves that Walker expects will save the state $30 million in the short term and up to $300 million over the next two years. In exchange for the savings, Walker promised no layoffs or furloughs – but threatened to lay off 6,000 workers if the bills failed to pass.

But state workers, many of whom belong to unions, contend the bill is a pretext to decimating union rights. The bill would strip nearly all collective bargaining power for most government workers at the state, county and local levels, including teachers; the only exceptions would be for police, firefighters and state troopers.

Unions would have to win a public referendum to seek pay raises higher than the consumer price index. The bill would also require union members to vote every year on whether they wanted to continue to be represented by their union, and would forbid unions from forcing workers to pay union dues as a condition of employment.

The state Assembly passed Walker’s bill Feb. 24. It was stalled in the state Senate, because Democrats left Wisconsin to prevent a quorum from being called, delaying consideration of the bill.

“The situation in Wisconsin is not unique,” Bishop Blaire said. “Other states and the federal government also face daunting challenges of growing budget deficits and how to allocate burdens and share sacrifice in ways that reflect principles of social justice, economic fairness and wise stewardship.”

He told Archbishop Listecki, “Your efforts to share the consistent teaching of the church in the midst of this controversy are an example for all of us on how to apply our moral principles to the ‘signs of the times.’“

“Hard times do not nullify the moral obligation each of us has to respect the legitimate rights of workers,” Archbishop Listecki said in his Feb. 16 statement, adding it would be “a mistake to marginalize or dismiss unions as impediments to economic growth.”

Bishop Morlino urged Catholics of the Madison Diocese to consider the fairness issue.

“At a time when all are called to sacrifice, this question requires a weighing of the relative sacrifice which all are called upon to make, so that a judgment about just proportions can be made by each one of us,” Bishop Morlino said in a Feb. 24 column in the Catholic Herald, Madison’s diocesan newspaper.

“There appears to be no common ground in terms of what the word ‘fair’ actually means among various individuals. Some believe that ‘a fair solution’ would require sacrifice from everyone but self,” he added.

“The relativism of our culture and society once again does us grave harm, because the cultural response to the question of the meaning of ‘fair’ is, ‘well, what’s fair for you is fair for you and what’s fair for me is fair for me,’ leaving us no common ground for reasonable and civil discourse. We are left with our emotions about the word ‘fair.’ This, then, is a moment in our state and in our nation when the terrible effects of relativism on a culture are being blatantly displayed.”

Bishop Morlino added, “A culture governed by the dictatorship of relativism cannot agree on what the word ‘fair’ means. What is left is the emotion which displays itself over and over again with increased lack of the civility to which President Obama recently, rightfully, called all of us.”

The Catholic Labor Network, in its Feb. 24 newsletter, released a copy of a letter it had sent to all Wisconsin legislators on the right to organize.

“While we do not minimize the depth of the current economic crisis, we must conclude that any measure that attempts to resolve them by depriving workers of the right to organize and collectively bargain stands in direct conflict with the teaching of the Catholic Church,” the letter said.

“As brothers and sisters in the faith we urge our fellow Catholic legislators to seek remedies for Wisconsin’s economic challenges that respects our Catholic magisterial tradition, and honor the rights of Wisconsin’s workers, both public and private, to join labor unions.”